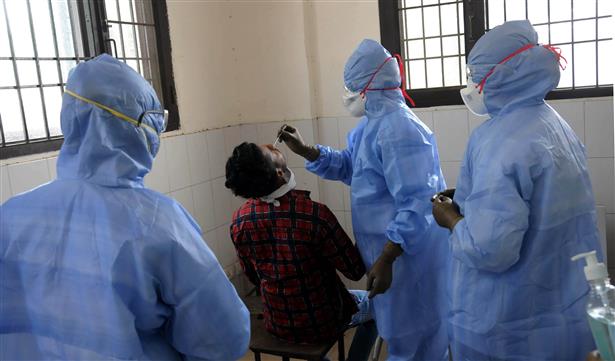 Over 76 per cent of Punjab’s cases were recorded in May alone. Tribune file photo

Ludhiana reported a massive spike in coronavirus cases in the state on Tuesday, accounting for 19 of Punjab’s 22 new cases.

Patiala (2) and Gurdaspur (1) made up the rest on Tuesday’s count.

The third case was a person who travelled to Uttar Pradesh.

Of the others that remain, two were contacts of Railway Police Force personnel who tested positive before, another one was a contact of another already diagnosed case, four others from the flu corner and the last was a new case, Punjab’s daily COVID bulletin showed.

Both of Patiala’s new cases were people who recently came back from Mumbai.

One pilgrim tested positive in Gurdaspur.

The district-wise breakup of the state’s COVID-19 cases is as follows:

Over 76 per cent of Punjab’s cases were recorded in May alone.