Congress workers were in the minibus which was on its way from Zira to Chandigarh; they were going for the installation ceremony of new Punjab Pardesh Congress chief Navjot Singh Sidhu 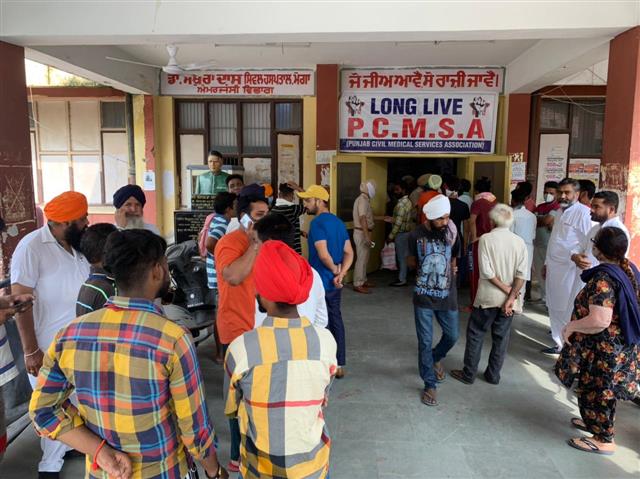 People gather at the hospital.

Three persons were killed and 50 others injured when a Punjab Roadways bus and a private minibus collided near Lohara village in  Moga district on Friday morning.

The injured, most of them Congress workers, were rushed to the district hospital at Moga from where three seriously injured were referred to Guru Gobind Singh Medical College and Hospital at Faridkot.

Congress workers were in the minibus which was on its way from Zira to Chandigarh. They were going for the installation ceremony of new Punjab Pardesh Congress chief Navjot Singh Sidhu.

The police reached the spot and began investigation.

Preliminary investigation revealed that the driver of the minibus was driving the bus at a high speed, the police said.

The deceased have been identified as Virsa Singh and Vicky, residents of Malsihan village in Zira of Ferozepur; and Gurdev Singh, resident of Ghuduwala village in Ferozepur.

Later in the evening, Sidhu visited the district hospital in Moga to enquire about the health condition of the injured workers.

Saddened to learn of the bus accident in Moga district in which 3 Congress workers have reportedly died & many persons are injured. Have directed DC Moga to immediately provide full medical treatment to all the injured and to send a report to the Government.