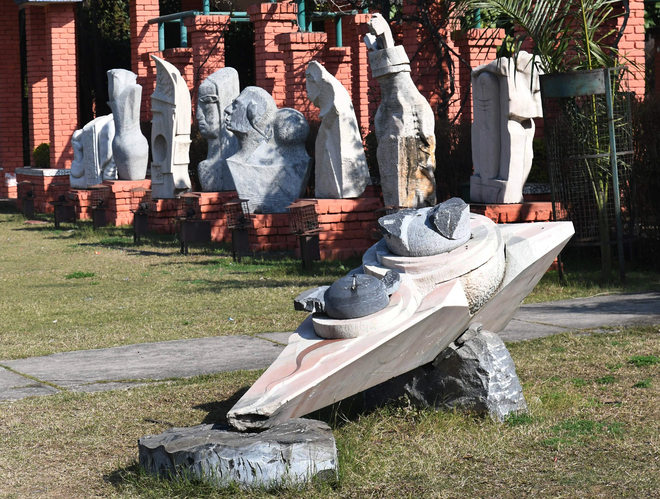 After falling victim to ‘moral policing’ around five years, the country’s biggest sculpture park in Kalagram here is under threat as over 30 sculptures have been shifted to other places.

The park is an outcome of efforts of past two decades as the North Zone Cultural Centre (NZCC) started holding sculpture-making camps in 2003. Besides other art works, there was a collection of over 230 stone and marble sculptures, including works of celebrated artists like Ratilal Kansodaria.

However, it seems that the centre is nobody’s baby now as around 35 sculptures have been taken to Patiala and Srinagar on one pretext or the other. Even the sculptures installed in the park are in a state of neglect. A large number are broken or have fallen from their pedestals.

“What we need are two labourers for a day and small repair work,” said an official, who wished not be identified.

Besides, a large collection of terracotta sculptures was crumbling in the store without any upkeep.

Of these, two were illegally taken by an officer and installed in the lawn of his private residence in Urban Estate in Patiala. The NZCC brought these back after his retirement a few years ago.

Sources said the sad state of the park was brought to the knowledge of senior officers, but nobody has paid heed to it. The sources said now the officers were not even serious about updating the inventory of the art work stored in Kalagram. This has made it easy to move the sculptures to other places.

Around five years ago following complaint of ‘obscenity’ by a Chandigarh-based advocate, the NZCC had removed 19 sculptures from the park.

Saubhagya Vardhan, director, NZCC didn’t take calls despite repeated attempts. He did not even respond to a WhatsApp message.