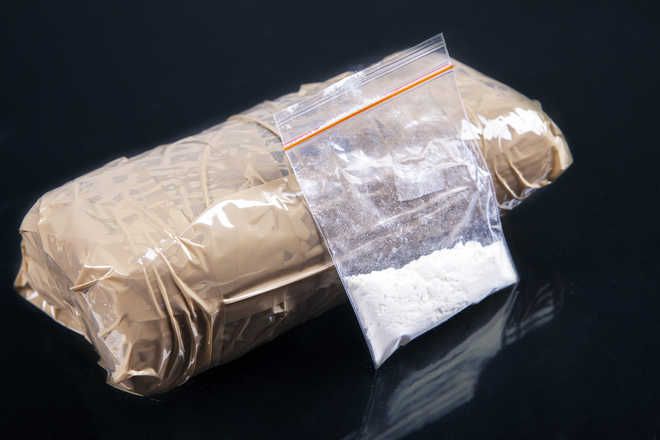 The local police have arrested two persons with 38-kg heroin concealed in the toolbox of a truck coming from Gujarat today.

Those arrested have been identified as Kulwinder Ram, alias Kinda, and Bittu, both residents of Balachaur. Two drug smugglers — Rajesh Kumar, alias Sonu Khatri, of Rakkara Dhahan and Som Nath, alias Bikko, of Karawar — have been booked. The police have impounded the truck.

Ludhiana Range IG Surinder Pal Singh Parmar, accompanied by Nawanshahr SSP Bhagirath Meena, while addressing a press conference in Nawanshahr, said the police had received a tip-off that a drug smuggler, Rajesh Kumar, along with three others, was engaged in the business of supplying large quantities of heroin in different areas of Punjab by bringing it from other states in the truck.

At a naka on the Mahalon bypass, the police signalled the truck to stop, but truck driver Kulwinder Kinda tried to flee. However, the police managed to catch him and Bittu, and seized a 38-kg packet of heroin wrapped in tarpaulin and concealed in the toolbox of the truck, the SSP said.

He added that during preliminary interrogation, Kinda disclosed that he had received a call from Rajesh Kumar via the Telegram app, who gave him a location in Bhuj (Gujarat) to pick heroin and bring it to Punjab. When he reached the location, an unknown person came and loaded the drug into his truck, he added.