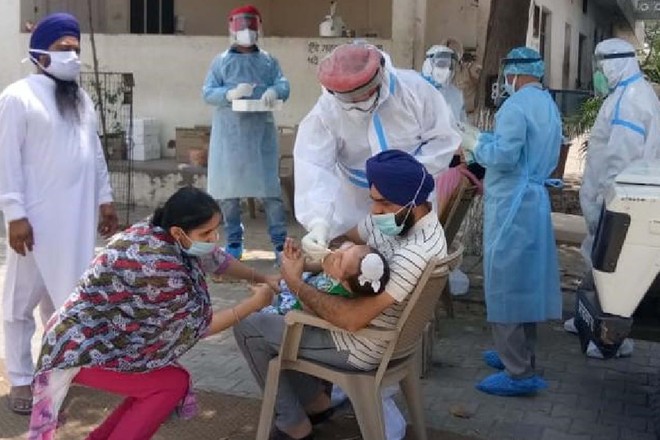 An official takes the swab sample of a boy at a quarantine centre in Patiala on Friday. Tribune photo: Rajesh Sachar

With 39 fresh cases being reported today, the state count of Covid-19 cases has reached 2,197.

With the new cases, the total count in the district has reached 366.

Of the 30 active cases in the district, 11 are from the Shahkot IMA centre alone.

In Ludhiana, four new cases were reported, including that of a 57-year-old man who had visited a private hospital for treatment. Apart from this, a 27-year-old man from Samrala who travelled to Delhi on May 20 also tested positive today.

Meanwhile, a 33-year-old NRI woman whose sample was taken at the PGI has tested positive. She had returned from Mumbai after staying there for two months. She is admitted to MCH, Vardhman.

Meanwhile, Muktsar district today became Covid-free as the lone patient admitted to a hospital at Thehri village was discharged. Dr HN Singh, Chief Medical Officer, Muktsar, said, “All 67 patients in the district have been cured and discharged. The last remaining patient was discharged today. Now, the results of 226 samples are awaited.”