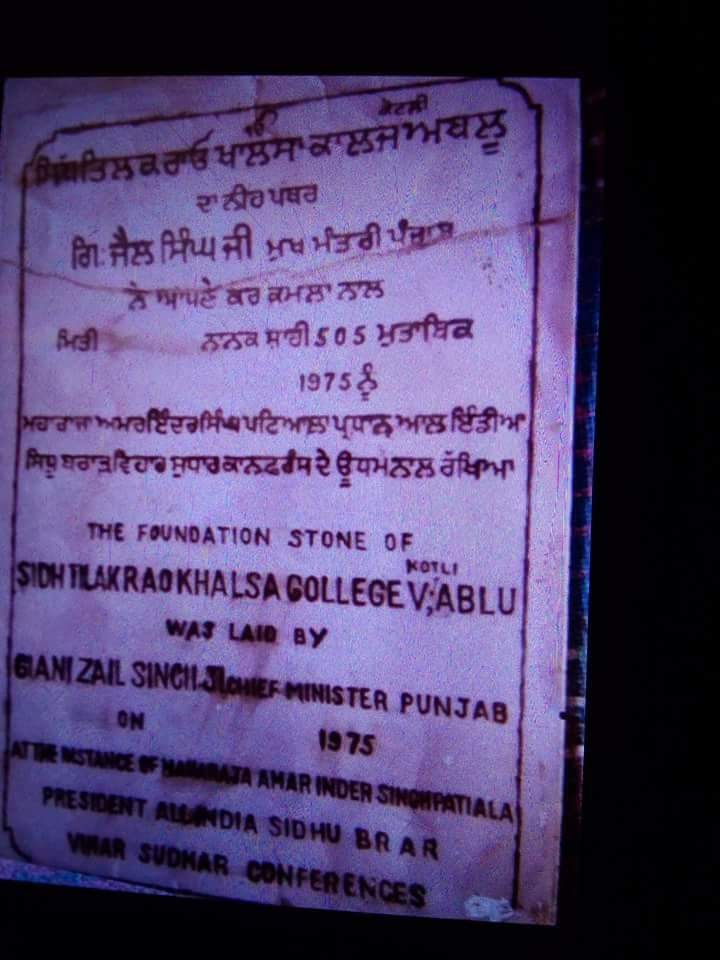 It’s been more than 47 years, when the then Chief Minister of Punjab Giani Zail Singh, who later became the first Sikh President of the country, laid the foundation stone of ‘Sidh Tilak Rao Khalsa College’ at Ablu village in Bathinda district in 1975.

We have to check the old records pertaining to the project before we can take up the matter with the govt. Villagers can again submit the representations they had given in the past. After going through the records, if the need for a college is felt then it will be considered. — Showkat Ahmad Parray, DC

But even after close to five decades, the project never saw the light of day. Tucked away in the outskirts of the district, Ablu village is situated 30 km from the heart of the city. With no college in the area, students of nearly 30 villages in the Goniana block have to travel to Bathinda city, while some of them even go to the neighbouring Gidderbaha town in Muktsar district.

“Lakhs of rupees are splurged on functions when the CM participates in foundation stone laying ceremonies, but afterwards decades go by and these foundation stones are left to gather dust. Nothing should be more disheartening for successive governments than this. If introduced, students of more than two and half dozen villages would directly benefit from it,” said a former village sarpanch.

Sarbjit Singh, another former sarpanch, said: “We reached out to former CM Captain Amarinder Singh (then a Cabinet minister), who accompanied Giani Zail Singh during the foundation stone laying ceremony on a number of occasions, and gave him written representations, but to no avail. Time and again, our ancestors also kept taking up the matter with successive governments, but the project could not start.”

“Every minister or leader we approached always acknowledged our genuine demand for a college, which would have been instrumental in providing education to students of more than 30 villages, but they never took any concrete step to materialise it. We have more than 10 acres which can be utilised for constructing the campus. Villagers in our area have even used different social media platforms to air their grievances regarding the need for a college in our area.”

Residents rued that their area was located distantly from the city and considered one of the most backward areas in the region with no college, hospital, rail or proper transport connectivity. The government middle school in the village was converted into a high school only in 2016.

“Not just dust, the foundation stone has even developed cracks at some places but we are still hopeful that a college will come up in our backward village,” residents said.

Showkat Ahmad Parray, Deputy Commissioner, Bathinda, said: “We have to check the old records pertaining to the project before we can take up the matter with the government. Residents of the village can again submit the representations they

had given in the past. After going through the records, if the need to provide a college is felt, then it will definitely be considered.”