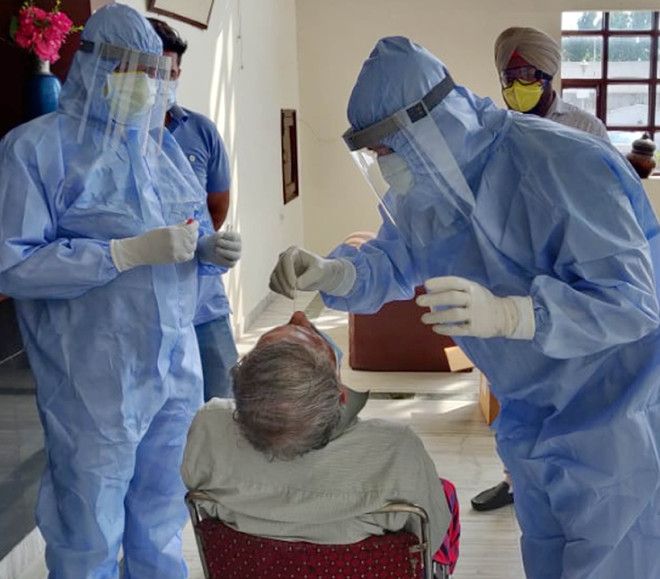 With another death due to Covid-19 in Pathankot, the total number of casualties in the state has risen to 45. Besides, one patient is critical in Ludhiana and is on a ventilator, while two others are on oxygen support.

As per health officials, the latest victim was identified as Inderpal Singh (50). He hailed from Mirpur Colony in Pathankot. He reported at the local Civil Hospital with some respiratory problem. “He was also a diabetic. Since he was showing symptoms of Covid, we took his samples and asked him to home quarantine himself. His test later turned positive,” said Pathankot Senior Medical Officer Dr Bhupinder Singh.

Meanwhile, 30 fresh cases were reported today, which took the state’s count to 2,263.

As per the media bulletin, Ludhiana reported nine cases, Ropar eight, Jalandhar and Hoshiarpur four each, Amritsar three and Moga and Barnala one each.

Among Ludhiana patients, seven are family members of 53-year-old resident of Chowni Mohalla, who died at DMCH yesterday. The other two are undertrials — one 34-year-old, who was booked in a murder bid case, and the other, an 18-year-old from Gurdaspur facing murder charge. Both of them were at Borstal jail, which is a special quarantine facility for state prisoners.

Among the Jalandhar patients are a 38-year-old woman and her 15-year-old son of Dalla village. They had come in contact with a previously positive patient.

In Amritsar, the health authorities said two of the three new positive cases are residents of Mehta village who had returned from the UK recently. The third patient is from the Park Avenue area, who has influenza-like illness.

After the release of the government bulletin, Fazilka reported two fresh cases after remaining Covid-free for nearly 10 days.