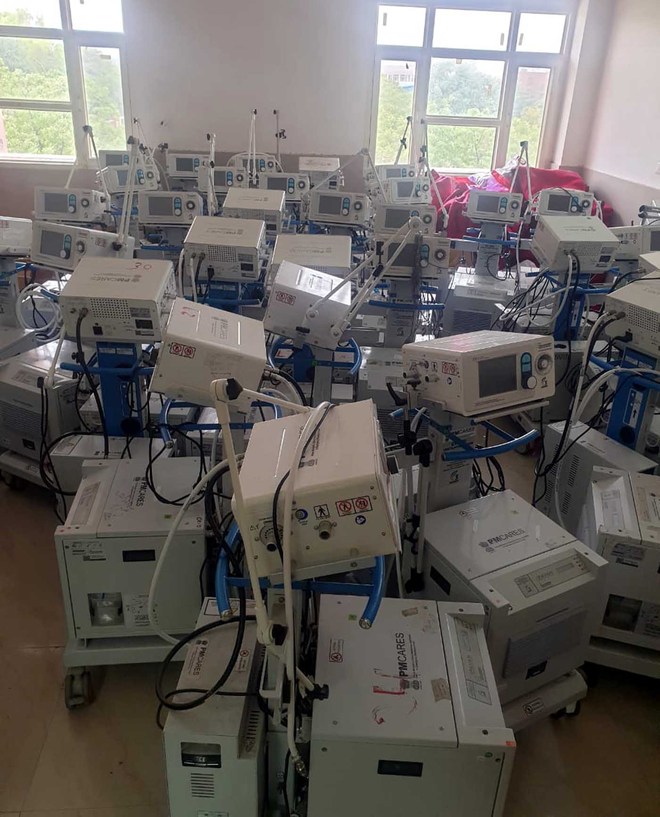 Received under PM Cares, the dysfunctional ventilators are gathering dust at Guru Gobind Singh Medical College and Hospital in Faridkot.

Seventy-one of the 80 ventilators Guru Gobind Singh Medical College and Hospital (GGSMCH) received from the PM Cares Fund and the ventilator manufacturer AgVa Healthcare have turned out to be non-functional due to various technical snags.

The hospital already had 39 ventilators of which two were dysfunctional. The situation is alarming as at present over 310 Covid patients are admitted to the hospital.

Anaesthetists and intensive care doctors said they didn’t trust the ventilators sent by the Centre as those functioned for just one or two hours before abruptly running out of order.

The main function of a ventilator is to provide oxygen at varying levels as the oxygen requirement of every patient is different. Doctors complain that the pressure drops within half an hour of using these ventilators. “We have to be quite attentive while using these ventilators. It’s a challenge as one has to stay near the patient to avoid any problem, which is really difficult under current circumstances,” a doctor said.

Dr Raj Bahadur, Vice-Chancellor, Baba Farid University of Health Sciences, of which GGSMCH is a constituent college, said: “We have raised these issues with the government. We have even conveyed that the quality of the ventilators provided under the PM Cares Fund is significantly inferior. Besides, the functional machines, too, are constantly hit by snags, so we cannot use these for patients until we have a repair mechanism in place.”

The Punjab Chief Secretary has approved the hiring of engineers and technicians for the repair of these ventilators. “They are expected to reach Faridkot in the next 24 hours,” a source said.

“We want a long-term comprehensive maintenance contract with the agency, which has provided these ventilators,” Dr Bahadur said, adding that despite all these odds, doctors and the paramedical staff at the hospital are trying their best to take care of the patients.