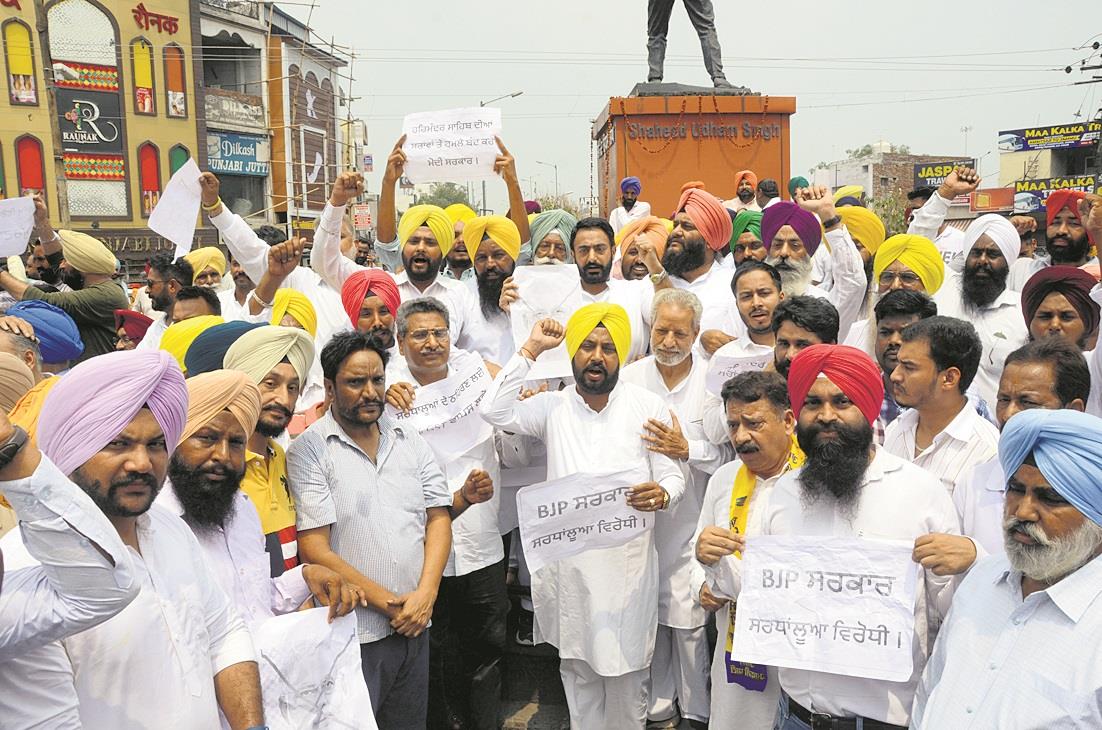 Aam Aadmi Party workers and leaders during a protest against the Union Government over the imposition of 12 per cent GST on serais in Amritsar on Wednesday. Photo: vishal kumar

Activists of the Aam Aadmi Party (AAP) staged a protest against the Central Government’s decision to impose GST on “serais” situated in the Golden Temple complex here on Wednesday.

A large number of AAP workers and Sikh sangat participated in the protest march taken out from the Bhandari railway overbridge to the Hall Gate. It was against the Centre Government’s move to levy 12 per cent GST on “serais” (inns).

The Modi government’s anti-Sikh and anti-Punjab decision to levy GST on ‘serais’ is an unfortunate move. These ‘serais’ have been built only for the convenience of pilgrims who come to pay obeisance at the Golden Temple. No personal benefit is involved here. — Gurdev Singh Lakhana, AAP state secretary

The BJP always does politics on religion and it is doing the same now. Mixing religion and politics is wrong. Religious places should be kept out of the ambit of GST. The Central Government had always taken anti-people decisions. — Prabhabir Singh Brar, district AAP president

Demanding immediate rollback of the decision, the protesters stated that the BJP had hurt the religious sentiments of devotees. During the protest, the protesters raised slogans against the tax calling it “zajiya tax” imposed on Sikhs and Punjabis by the Central Government.

Addressing party workers, Lakhana said the Modi government’s anti-Sikh and anti-Punjab decision to levy the GST on “serais” was an unfortunate move. He termed the GST on religious places as unfortunate. He said these “serais” were built only for the convenience of pilgrims coming from far-off places to pay obeisance at the Golden Temple. No personal benefit was involved here and he condemned this decision of the Centre.

Talking to mediapersons, district AAP president Prabhabir Singh Brar said the BJP had always been doing politics on religion and even now the same was being done by imposing GST on inns. He said mixing religion and politics was wrong. Religious places should be kept out of the ambit of GST. He said the Central Government had always taken anti-people decisions.