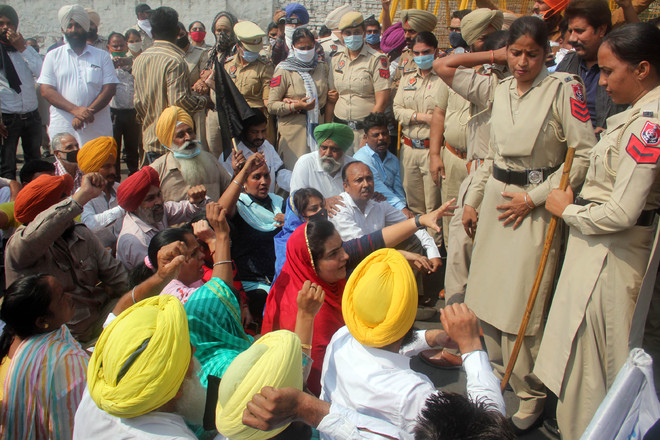 The AAP today slammed Finance Minister Manpreet Singh Badal for proposing to demolish the thermal power plant here and lease out its land to private companies at Re 1 per acre.

MLAs Baljinder Kaur and Rupinder Kaur Ruby led a march to Manpreet’s office. However, the police used barricading to prevent the protesters from reaching the office.

They then staged a dharna and raised slogans against the Congress government and Finance Minister. The protest ended after the Tehsildar reached the spot and took a letter of demands addressed to the Governor.

Prof Baljinder Kaur said SAD president Sukhbir Singh Badal had earlier shut down the Guru Nanak Dev Thermal Plant in Malwa to benefit private players. Now, Manpreet had gone back on his promise by demolishing the heritage project and allowing open loot of its land worth Rs 4,000 crore.

Ruby said had the Congress government’s intentions not been suspect, the Bathinda plant would have run till 2031, with one unit running on straw generating Rs 3,000 per acre of additional income for farmers. — TNS