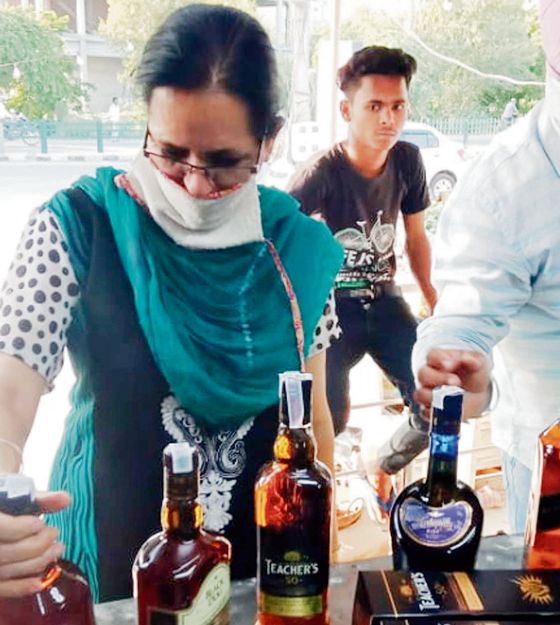 After sealing an illegal liquor distillery run from a cold store in Rajpura, the Excise Department has started collecting samples following a revelation that key accused, Khanpur Khurd sarpanch Amrik Singh, is a partner in many authorised liquor vends in and around Rajpura.

A probe is now under way to ascertain if premium liquor brands sold at vends across the state and in Haryana were made at the illegal distillery using ENL (extra neutral alcohol).

The department is also contemplating cancelling liquor vend licences of the accused. “We will take action once the police complete the probe as we are yet to ascertain if the same liquor was sold at vends owned by Amrik,” said Patiala ETO (Excise) Upkar Singh. “Amrik Singh, who was operating the distillery along with some politicians, made liquor by diluting ENA, which costs Rs 55 a litre and has 72.5 per cent alcohol content. They would dilute it to 40 per cent alcohol by mixing water and add artificial flavour and colour,” the police said.

Political patronage allegedly ensured that the entire operation went on smoothly and the accused made 1,000 per cent profit. “They profited by more than Rs 100 crore over the past few months,” local liquor contractors say. “An order for a premium brand of IMFL costing Rs 24,000 per carton in the open market was readied at this distillery at a cost of around Rs 240,” they alleged.

“The accused would take orders at authorised vends and make available the ordered brand overnight. From labels to the liquid inside the bottle, everything was fake,” excise officials said.

“Instead of bringing fake liquor to the authorised vends, home delivery was done to hoodwink officials and other partners,” they claim.

“Due to that reason, no fake liquor was found at authorised liquor vends although these were inspected regularly,” Upkar Singh said. “We will now collect samples from all liquor vends,” he said. Patiala SSP Mandeep Singh Sidhu said, “We are still investigating the matter.” Meanwhile, the police managed to arrest Dipesh, another accused in the case, on Thursday.