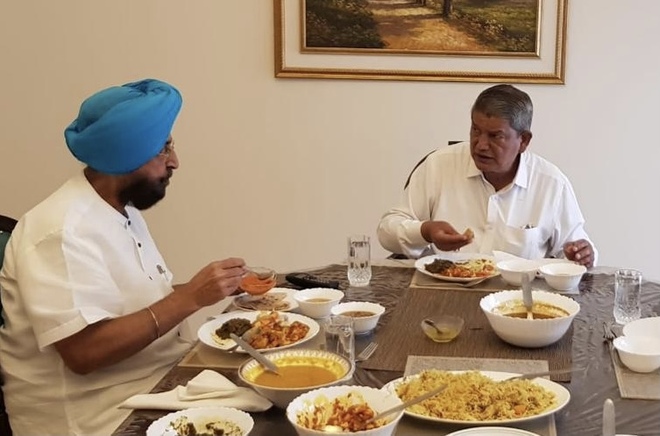 Congress state affairs in charge Harish Rawat during a luncheon with party MP Partap Bajwa at the latter’s residence in Chandigarh.

Aimed at ironing out differences between Chief Minister Capt Amarinder Singh and his rivals within the party, AICC general secretary and state affairs in charge Harish Rawat attended a luncheon with Congress Rajya Sabha MP Partap Bajwa at the latter’s residence in Chandigarh.

A few days ago, Rawat had gone to the Amritsar residence of former Cabinet Minister Navjot Singh Sidhu to break the ice between him and the Chief Minister.

Though Bajwa refused to share details of the meeting, sources said in the two-hour-long meeting Rawat discussed the role he might be playing in the run-up to the Assembly elections. Bajwa is one of the contenders for the party state president post, though Rawat has denied any move to replace Jakhar.

During the recent visit of party former president Rahul Gandhi to the state, Bajwa had not only shared stage with Capt Amarinder Singh but also attended the lunch hosted by him.

Sources said efforts to bridge the gap between the Chief Minister and Sidhu had started showing results, as was visible during the Vidhan Sabha session. A formal meeting between the two was being worked out by Rawat on the insistence of the party high command. On being asked about appointment of