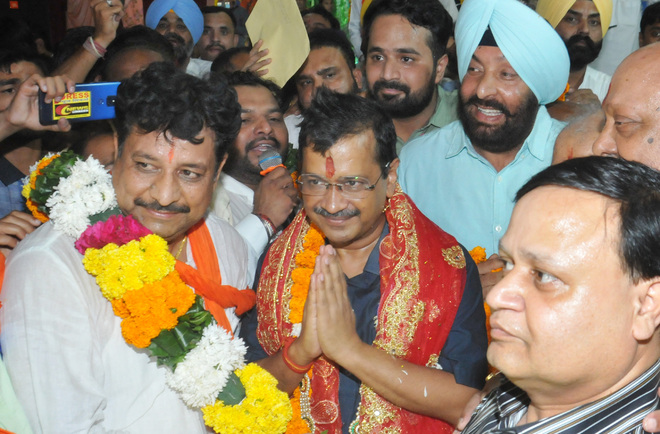 With the Assembly elections round the corner, both leaders have chosen Navratras for the visit in a bid to woo the local Hindu community. The Hindu voter, especially from the trading class, is generally believed to be inclined towards the BJP. With the saffron party already facing the heat over the farmers’ protests in Delhi and Punjab, the recent backlash over the Lakhimpur Kheri killings has further dented party’s prospects in the elections, slated a few months from now.

Kejriwal, who was received by local industrialist Sheetal Vij at the temple, sought the blessings of Sri Tripurmalini Shakti Peeth and addressed devotees at a pandal.

“I am not here as a leader but as a common man to seek blessings. I have prayed for the prosperity and communal harmony of Punjab, Delhi and the country as a whole,” he said. He was flanked by AAP state president and MP Bhagwant Mann, state affairs incharge Jarnail Singh, co-incharge Raghav Chadha and Leader of Opposition Harpal Singh Cheema, among others.

Earlier, the security staff had a tough time controlling the crowd as a stampede-like situation prevailed on the temple premises. — TNS