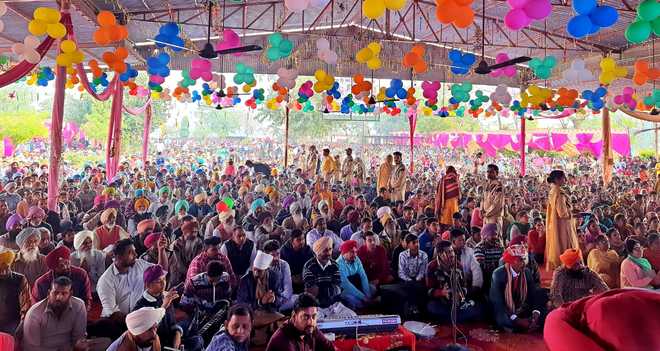 Dera Sacha Sauda followers during a congregation in Sangrur on Sunday. Tribune photo

Ahead of the Assembly elections, Dera Sacha Sauda followers congregated in thousands in Sangrur, Bathinda and Faridkot districts on Sunday.

In Sangrur, the gathering set alarm bells ringing among many area politicians, who were ignoring the dera followers for the past some years. Though the followers gathered to celebrate the birthday of former dera head Shah Mastana ji, the anger among them against politicians of almost all parties was visible. Many followers said under the command of the dera, they had always worked for the welfare of society and organised blood donation camps, cleaned towns and solemnised marriages of poor girls. Punjab Cabinet Minister Vijay Inder Singla also attended the function.

“The gathering of thousands from just Sangrur district is a befitting reply to all those who had been spreading rumours of erosion in the base of the dera. All followers have come on their own,” said Harinder Insan Mangwal, member of a committee of the dera.

The members avoided discussion about politics openly, but there were murmurs that the dera must have some strong strategy for the forthcoming Assembly elections in Punjab. Many followers reportedly got calls from politicians after the function in the evening. “The elections are approaching fast so I request the dera management to scan the record of all politicians to devise a strong strategy for the poll,” said a postgraduate youth.

Interestingly, many politicians sent their staff to check the gathering after getting information about the event at Nam Charcha Ghar on the Sangrur-Patiala road.

“I was going to Mangwal village,” said a personal assistant of a local politician. But when asked why he did not go through the main road, he did not give any satisfactory reply.