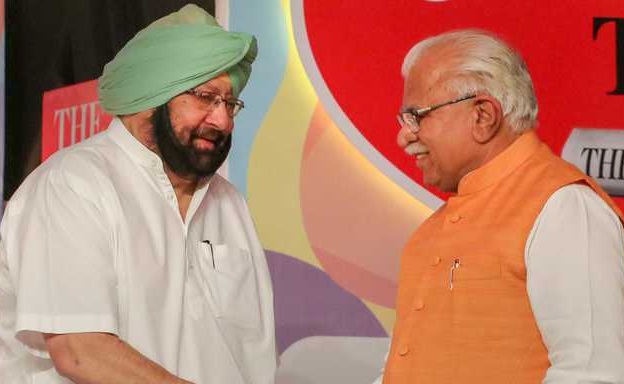 Punjab Chief Minister Amarinder Singh and his Haryana counterpart Manohar Lal Khattar on Thursday engaged in a war of words over farmers’ Delhi Chalo march against the Centre’s farm laws.

While Singh slammed Khattar for stopping farmers from moving towards the national capital, terming it as “totally undemocratic and unconstitutional”, the latter told the Punjab chief minister to stop “inciting innocent farmers”.

Singh took to Twitter for lashing out at his counterpart in Haryana after farmers were stopped from entering the state to move towards Delhi.

For nearly 2 months farmers have been protesting peacefully in Punjab without any problem. Why is Haryana govt provoking them by resorting to force? Don't the farmers have the right to pass peacefully through a public highway? @mlkhattar pic.twitter.com/NWyFwqOXEu

Haryana has completely sealed its borders with Punjab to prevent farmers from entering the state for their protest march.

“Why is @mlkhattar govt in Haryana stopping the farmers from moving to Delhi? The tyrannical use of brute force against peacefully protesting farmers is totally undemocratic and unconstitutional,” said Singh in a tweet.

He said farmers have been peacefully protesting in Punjab against the farm laws for two months.

“Why is Haryana govt provoking them by resorting to force? Don’t the farmers have the right to pass peacefully through a public highway,” Singh asked.

It’s a sad irony that on #ConstitutionDay2020 the constitutional right of farmers is being oppressed in this manner. Let them pass @mlkhattar ji, don't push them to the brink. Let them take their voice to Delhi peacefully. pic.twitter.com/48P0rvILVU

The Punjab chief minister said it was a “sad irony” that the constitutional rights of farmers were being “oppressed” on Constitution Day.

Let them pass @mlkhattar ji, don’t push them to the brink. Let them take their voice to Delhi peacefully,” Singh said.

He also appealed to the BJP to direct the Khattar-led government not to indulge in “strong arm tactics” against the farmers.

Khattar asked Singh to desist from misleading farmers, highlighting that he has already pledged to quit politics if the Minimum Support Price mechanism is ever dismantled.

He accused Singh of “only tweeting” and “running away from talks” with him on the issue.

“I’ve been trying to reach out to you for the last 3 days but, sadly, you have decided to stay unreachable --  is this how serious you are for farmers’ issues? You’re only tweeting and running away from talks, why,” Khattar asked in another tweet.

Launching a scathing attack on Singh, the Haryana chief minister told him, “Time for your lies, deception and propaganda is over—let the people see your real face.” “Please stop putting the lives of people in danger during the corona pandemic. I urge you not to play with the lives of the people - at least avoid cheap politics during the time of the pandemic,” Khattar told Singh.

Singh expressed shock at his response.

“Shocked at your response @mlkhattar ji. It’s the farmers who’ve to be convinced on MSP, not me. You should’ve tried to talk to them before their #DilliChalo. And if you think I’m inciting farmers then why are Haryana farmers also marching to Delhi,” he asked.

As for endangering lives during #COVID19, have you forgotten that it was @BJP4India led central govt that pushed through those #FarmLaws amid the pandemic, uncaring about the impact they’d have on our farmers? Why didn’t you speak out then @mlkhattar Ji,” Singh asked Khattar. — PTI