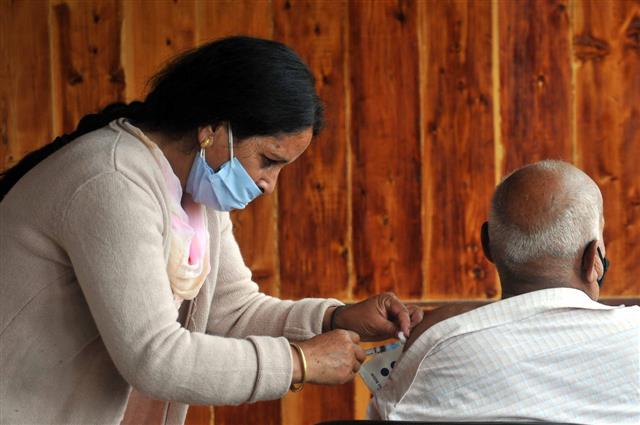 Even as he noted with satisfaction that the Covid numbers in the state appeared to have plateaued, Punjab Chief Minister, Captain Amarinder Singh, on Thursday ordered strict enforcement of Covid appropriate protocols to prevent any super spread events, along with an increase in daily vaccination doses to 2 lakh, and a special control room to be set up for effective in-person monitoring of home isolation cases.

Citing figures on mortality and positivity, the Chief Minister said the restrictions currently in place are showing results, and the same needed to be implemented strictly, particularly in Mohali and other big cities showing high rates of transmission and positivity.

He pointed out that the state’s positivity rate stands at 8.1%, even though positivity in the age group of fewer than 40 years had come down from 54% (September 2020) to 50% (March 2021). The curbs, coupled with strong efforts by all concerned, had helped reduce the percentage of mortality in the age group below 60 years from 50% (September 2020) to 40% (in March 2021), and should be strictly adhered to, he added. However, he reiterated his demand that the Centre should allow vaccination for under 45 in areas with more cases since the UK variant was infecting younger people more. He directed Chief Secretary Vini Mahajan to pursue the matter with the central government, while Dr KK Talwar stressed that patients of kidney and liver disease who are under 45 years should at least be allowed to be vaccinated.

The Chief Minister was chairing a virtual meeting with several ministers, including Health Minister Balbir Sidhu, Education Minister Vijay Inder Singla & Medical Education Minister OP Soni, along with senior administrative and police officials as well as medical/health experts to review the Covid and vaccine situation in the state.

Making it clear that there was no scope for complacency, the Chief Minister said the special control room with a dedicated team could utilise ANMs, ASHA workers, interns from medical colleges, to move beyond just telephonic to more in-person monitoring. GMCHs should provide students to RRTs at District Level immediately, he further directed the Health Department.

On the vaccination front, the Chief Minister directed the Health Department to further scale up vaccination efforts to vaccinate the entire eligible population within this month, along with auditing of any deaths taking place after vaccination. While vaccination has increased to 90,000/ day we need to further take it up to 2,00,000/ day, he said, with Punjab currently has 3 lakh Covishield and 1 lakh Covaxin in stock.

Sufficiency of doses must be ensured at all times and it must be ensured that the COWIN portal is updated so that the actual position is reflected, said the Chief Minister, adding that districts must not spread themselves too thin and execute vaccination strategies that ensure no wastage and adequate availability. He also ordered immediate overtime allowance and weekly offs to be given to all vaccinators, to reduce the burden on them. He also directed the Department of Information & PR to immediately roll out the IEC campaign, with proper utilisation of the services of actor Sonu Sood, whom the state government has appointed as a brand ambassador for the campaign. Of the 75 lakh population in the age group of 75+, so far only 15.56% have been vaccinated, he noted, stressing the need to create awareness to end the vaccine hesitancy.

Pointing to a Punjab Police case study, shared by DGP Dinkar Gupta, the Chief Minister pointed out that percentage increase in vaccination among police personnel had led to a clear downward trend and decline in active positive cases among the force. The empirical data clearly shows a positive effect of vaccination amongst the policemen, and not only the number of active positive cases has come down, but the policemen requiring critical medical care have also become negligible, the DGP informed the Chief Minister, citing the study findings. He disclosed that as against a peak of 1700 daily cases last year, this surge had seen only 400 cops getting infected on any given day at its peak. He informed the meeting that after taking the second dose, there had been no death in the department due to Covid.

The Chief Minister directed the Police Department to persuade and take for testing all those showing Covid inappropriate behaviour in public places, including at marriage palaces, and if they subsequently agree and are eligible, then also take them for vaccination, without the use of any coercive measures.

Noting that even though there had been a decline in CFR, almost 30% of deaths are taking place within two days of hospitalisation, the Chief Minister said around 84% of patients presented themselves at the hospital for the first time with severe symptoms, indicating delayed reporting. 90% of the total deaths have been of persons with comorbid conditions, he observed, directing the Department to ensure that those with COVID symptoms should immediately report to the nearest health facility to save precious lives. Those with diabetes, hypertension, kidney/lung disease, etc. should get tested and should be advised to report to the hospital in case of any symptoms, and should also be prioritised for vaccination if eligible, he added.

Pointing to the low contact tracing, Captain Amarinder asked the Department to aim for 30 contacts per positive patient. 100% of contacts traced must be tested with RAT for quicker identification and isolation of those who are positive, he said, adding that turnaround time for RTPCR samples needs to be reduced to less than a day. Approved list of private labs and well-functioning hospitals for testing should be put up in the public domain immediately, he further said, adding that while sampling has reached 40,000/day, it needed to be pushed up further to at least 50,000/ day.

Ventilators should be assigned to hospitals where they are needed, the Chief Minister further directed, adding that Oxygen kits, Remdesivir and other medicines are available in sufficient quantity, and must be effectively utilised. Districts such as Jalandhar, Mohali, Ludhiana where there is a higher level of L3 patients must increase the L3 capacity by directing private hospitals to reserve more beds for Covid, he further said.

Health Secretary Hussan Lal informed the Chief Minister that there was currently no shortage of Oxygen in the state, with three Oxygen plants already operational and two more in the process. He said the department was grateful to the Rajasthan chief minister for providing it with 20,000 doses of Remdisivir, which have been given out to both Government (12500) and well-functioning private (7500 doses) hospitals. Punjab still has about 7000 doses in stock, after giving around 300 even to PGI, he added.

Stressing the need for optimum utilisation of manpower, the Chief Minister said while the Police Department was already providing manpower and other support for the Covid effort, all other Departments, especially School Education and Higher Education, must also immediately issue orders regarding availability of staff from their departments.

While Fateh Kits are available in adequate quantities, it was important to ensure that these kits reach the patients on the same day as the person testing positive, directed the Chief Minister. The Ration Kit will comprise 10 Kg wheat flour, black channa 2 Kg and Sugar 2 Kg.

Earlier, in a presentation, the Health Secretary apprised the meeting that as against the 8.1% overall positivity in Punjab, the district of Mohali was reporting 18%. Along with

Jalandhar, Ludhiana and Patiala, the district is reported high transmission.

Dr KK Talwar, head of the state’s Covid task force, said while the curve seems to be flattening, caution was imperative, and anyone coming from a large gathering should quarantine at home for four days as a precautionary measure. The next few weeks were expected to show the same numbers, post which they should start declining, he added.