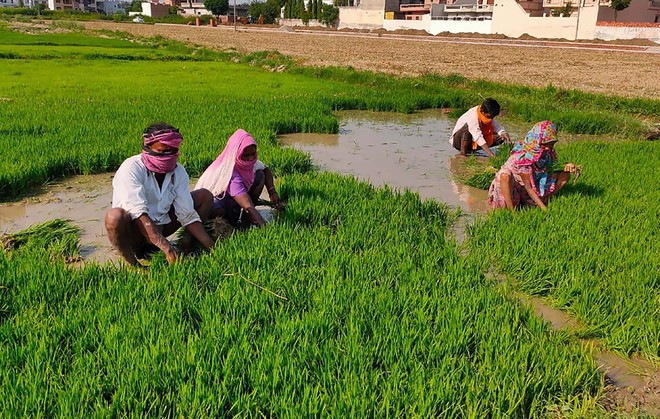 Labourers work in a paddy field at a village in Nawanshahr on Friday. Tribune photo: Malkiat Singh

With paddy season on and summer at its peak, the daily demand for power in the state has crossed 10,000 MW. The power utility has made the provision for additional power generation to meet the growing demand by making one unit of Guru Gobind Singh Termal Power Plant at Ropar (Unit VI), which was supplying nearly 150 MW, operational today.

Officials of Punjab State Power Corporation Limited (PSPCL) have indicated that in the coming days when paddy sowing would peak and industrial/business activity would pick up, the total daily demand for power could grow by 50 per cent. They said to some extent the situation could go out of hand given the fact that the total availability of power to the state from all sources was to the extent of around 13,900 MW.

According to PSPCL officials, the power situation was being monitored round the clock and depending upon the surge in demand, more power can be requisitioned from independent power plants (IPPs) in private sector at Rajpura, Talwandi Sabo and Goindwal Sahib. At the same time, power generation could also be commenced at the two government-owned thermal power stations at Ropar and Lehra Mohabbat.

Senior officials of the power utility said as of now there was no need for concern over the power scenario because the three thermal plants in the private sector (IPPs) had a total generation capacity of almost 4,000 MW and in addition depending on the demand of electricity, the public sector thermal plants at Ropar and Lehra Mohabbat could be made fully operational.