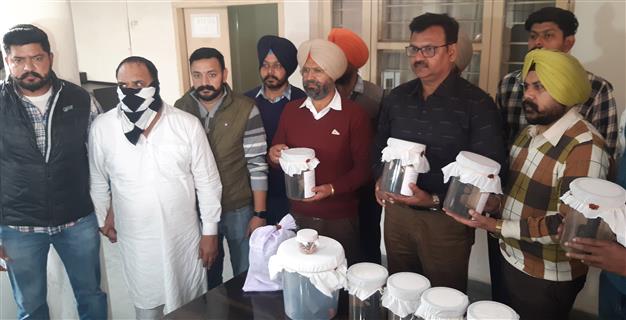 A special task force of the Punjab Police here today arrested an alleged smuggler, Paramjit Singh, alias Pamma, after recovering eight hi-tech pistols and 2 kg heroin, suspected to have been delivered through a drone from Pakistan.

A resident of Hawelian village of border Tarn Taran district, Pamma was arrested from Meerakot-Kherbad road following intelligence inputs. The illegal consignment was collected from the border by another smuggler and then handed over to Pamma, it is alleged. The pistols, including two of Glock brand manufactured in Turkey and six made in China, are believed to have been dropped through a drone on the intervening night of November 25/26. The Glock brand pistols have been seized for the first time from the border belt. The pistols are capable of firing a burst of 30 bullets in one go, causing extensive damage.

DSP Vavinder Mahajan claimed the accused was on his way to deliver the heroin further when he was arrested. He said investigations were underway to identify the cross-border smuggler who delivered the contraband to Pamma. He said the accused’s mobile phones would be sent for a forensic examination to ascertain his links with other smugglers, including those from Pakistan.

Pamma has two criminal cases related to weapons and fake currency pending against him in Haryana. He was released on bail from a jail in Hisar over a year ago. The police claimed he was operating at the behest of another alleged smuggler, Kuldeep Singh of Haryana, both of whom met him in the Hisar jail seven years ago. Kuldeep is currently settled in Dubai.

Pamma is a cousin of Iqbal Singh Shera, the prime suspect in the 532 kg heroin smuggling case, the contraband having been confiscated by customs officials in June 2019. Shera was yet to be arrested, said a police official.

A probe is underway to identify the cross-border smuggler who delivered the contraband to Pamma. — Vavinder Mahajan, DSP