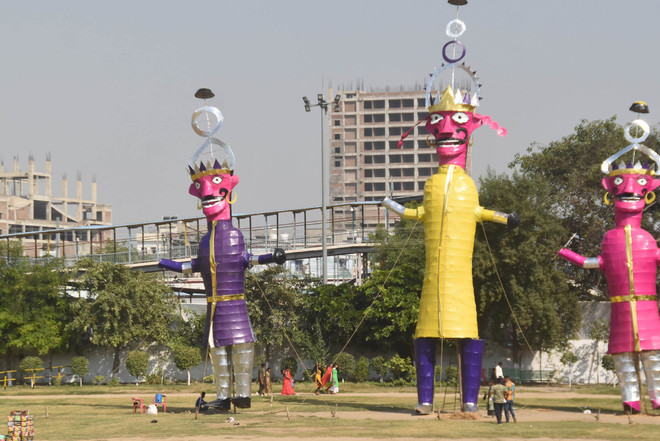 The effigies at a ground adjacent to the Bathinda railway station.

The district administration of Bathinda, it seems, has not learnt any lessons from the Amritsar train tragedy on Dasehra three years ago that claimed 61 lives. Showing “scant regard” for safety norms, a towering effigy of ‘Ravana’ installed at Railway Ground was burnt barely 50 to 60 metres from the city railway station.

The Bathinda city railway station, with its seven-lane tracks, is one of busiest and largest railway junctions in Asia. Interestingly, Chief Minister Charanjit Singh Channi was on a visit to the city today who greeted residents while addressing a gathering near the ground area.

The high-tension electric wires of the Railways that are passing barely few metres away from where the ‘Ravana’ and two other effigies were installed at the ground posed a risk of any untoward incident that can put lives of thousands of revellers in danger. Talking to The Tribune, a city-based social activist said, “It points towards gross negligence on part of the district administration that the Dasehra function is being allowed to take place in proximity to the city railway station. When there is a large crowd, the possibility of a stampede can never be ruled out as we have witnessed in the Amritsar train tragedy incident.”

Pradeep Sharma, Station Superintendent. Bathinda railway station, said, “The organisers have taken due permission to hold the celebrations at the Railway ground by paying the required fee to the authorities. As directed by senior officials of the Railways, we have taken all precautionary measures to avoid any untoward incident. Apart from round-the-clock monitoring, we have also ensured that trains will pass with less than 15 km/hr speed by the celebration venue. Moreover, the civil administration that has made elaborate arrangements.” Deputy Commissioner Arvind Pal Singh Sandhu said, “We have technical people working at the ground to ensure safety of residents during celebrations. The administration has taken care of security and safety measures so there is nothing to be worried about.”