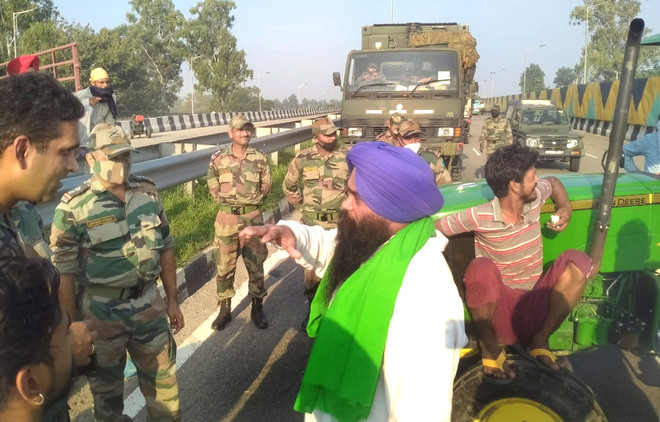 A protester talks to Army men in Jalandhar on Monday. Sarabjit Singh

It took the convoy nearly 30 minutes to cross the blockade after showing relevant documents to the farmers.

The incident took place around 7 am when the convoy, coming from Amritsar, wasn’t allowed to move near the PAP flyover. The convoy with over a dozen Army trucks and a Jeep was heading towards Rohtak.

An officer leading the convoy spoke to the farmers at the protest site to persuade them to remove the barricades. Initially refusing to budge, Bhartiya Kisan Union (Rajewal) activists later allowed them to pass through.

A goods train was also stopped by protesters forcibly at the Dakoha railway crossing near the Jalandhar Cantt railway station.

Though the locomotive operator of the train remained adamant on moving ahead, he had to move in the reverse direction after protesting farmers refused to leave the tracks.