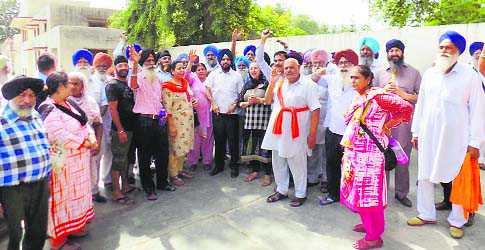 Around 100 Indian pilgrims who went to Pakistan to celebrate Baisakhi have tested Covid positive.

This was revealed on their arrival at the Attari-Wagah Joint Check Post after they underwent the mandatory rapid antigen test (RAT) for Covid. The testing is still on as they approached this side of the border after clearing immigration and customs formalities.

Amarjit Singh, assistant civil surgeon, said 98 pilgrims tested Covid positive after RAT was conducted. “We have been conducting RAT, the result of which comes in 15-20 minutes. Till now, around 300 pilgrims have been tested. Only those who cleared the test were allowed to leave, whereas the ones with positive reports were put under observation. It is yet to be decided whether they should be admitted to the Covid isolation wards or home-quarantined.”

On April 12, 815 Sikh pilgrims had gone to Pakistan to commemorate the occasion. They all were tested for Covid here and the SGPC had conducted a special two-day camp on its premises as it was mandatory to have a Covid negative report procured 72 hours before departure to another country.

They were granted a 10- day visa by the Pakistan High Commission and were allowed to visit various Sikh shrines besides attending the main event held at Gurdwara Panja Sahib at Hasan Abdal on April 14.

They also visited Gurdwara Darbar Sahib, Kartarpur, on April 19 and took out a nagar kirtan from Gurdwara Kartarpur Sahib in Narowal district in Pakistan to the Zero Line sharing the border of Dera Baba Nanak on the Indian Side.

Though the Pakistan authorities had made it mandatory to observe the standard operative procedure (SOP) set for Covid during the pilgrimage and the National Command Operation Centre of Pakistan had categorically directed the local Pakistan Sikh families to avoid their presence during the occasion, sources said the directions were flouted.

Also, the Indian pilgrims were told not to leave the shrine premises that were on the itinerary, yet many were spotted doing shopping on the streets of Lahore.