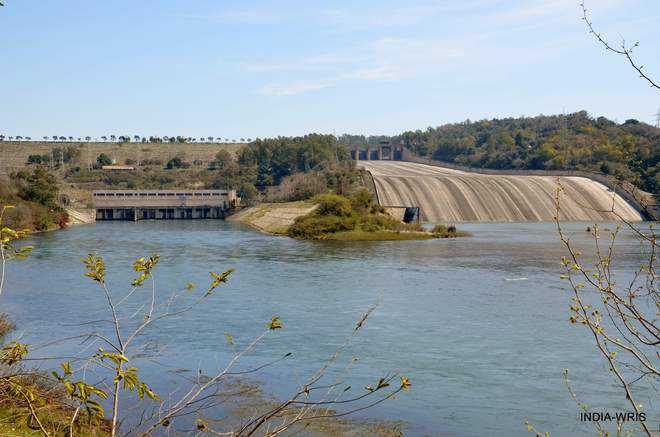 The reservoir at the Pong Dam is at present filled up to 75 per cent of its total capacity, which is still below the average storage of the past 10 years at this time of the season. File Photo

As the monsoon moves towards its withdrawal phase, the water level in key reservoirs in Punjab and Himachal Pradesh remains below normal. The rain received in the region this season, while falling within the range defined as normal, is below the long period average.

The total storage capacity in Punjab is 2.34 billion cubic meters (BCM) out of which the present storage is 1.36 BCM, revealed the data released by the Central Water Commission (CWC) on Thursday.

Himachal has a storage capacity of 12.48 BCM with the present storage being 9.32 BCM.

According to the India Meteorological Department, rain in Himachal Pradesh till September 3 has been 17 per cent below the long period average during the current monsoon season that began on June 1.

In Punjab and Haryana, the shortfall is seven per cent and five per cent respectively for this period. Deviation up to 19 per cent from the average is considered as normal.

The water level in Bhakra Dam that lies on the Sutlej river in Himachal was recorded at 505.40 meters on Thursday against the maximum level of 512.04 meters. This translates to the current storage being 74 per cent compared to 88 per cent at this time last year and an average of 84 per cent over the past 10 years.

At Pong Dam on the Beas river in Himachal, the water level was 418.98 meters against the upper limit of 423.67 meters. At present it is holding 75 per cent of its total water capacity as compared to 89 per cent last year and the 10-year average of 83 per cent.

Both these dams are controlled by the Bhakra Beas Management Board (BBMB).

Following unprecedented inflows into the reservoirs last year due to freak weather events which led to heavy release of excess water, BBMB sources said that this year the water levels were being deliberately kept low so as to create a buffer to cater to any such events.

Thein Dam, which is located on the Ravi in Punjab, had water reaching up to 514.25 meters against the maximum limit of 527.91 meters. Storage at this dam at present is just 58 per cent compared to 87 per cent last year and the average of 76 per cent over the past 10 years.