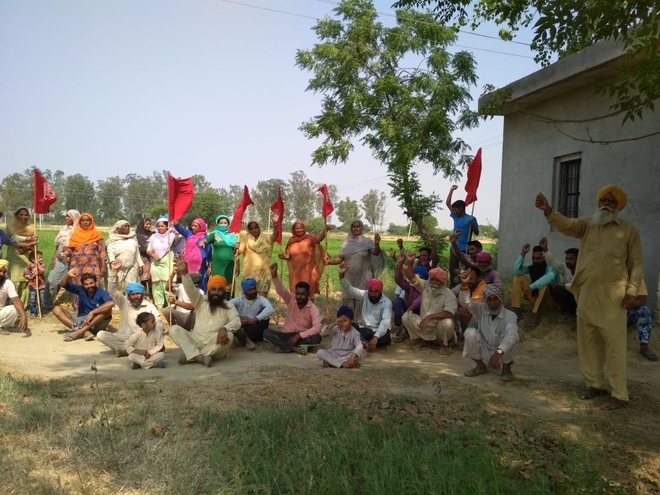 Villagers hold a protest in Sangrur on Thursday. Tribune photo

At a time when the state government has extended curfew to prevent gatherings, the decision of the Panchayat Department to conduct auction of village common lands in all villages of the district has angered the Dalits, who are demanding that the government should renew the lease contract of the reserved land of last year rather than conducting fresh auctions.

“It’s really strange that when the government has been taking steps to prevent gatherings, the Sangrur Panchayat Department has been asking villagers to take part in the auction. It’s a conspiracy as the administration wants to give reserved land from the village common land to landlords through a dummy auction. We will not allow it at any cost,” said Mukesh Malaud, president of the Zameen Prapati Sangharash Committee.

The department has issued village-wise schedule for auction of common lands owned by panchayats. But since of this total common land, 33 per cent is reserved for Dalits, they have been demanding that the authorities should renew the annual lease of last year. The Dalits have also offered to pay the lease money in two instalments. They say they will pay the first instalment immediately while the second one will be paid after six months.

“The Dalits could not converge to oppose the dummy auction due to the lockdown and the administration wants to take advantage of this. The administration should not get played into the hands of upper caste people,” said Lakhvir Singh Longowal, secretary of the Krantikari Pendu Mazdoor Union.

In Sangrur district, the auction of reserve lands has been a bone of contention for the past many years. Bloody clashes between Dalits and upper caste men have taken place repeatedly in many villages.

Sangrur ADC (Development) Rajinder Batra said they had been conducting auctions as per the directions of the government. “Auctions are underway and they are being conducted with transparency. If anyone has a problem, he can contact my office anytime,” Batra said.