Cops get 5-day custody of suspects 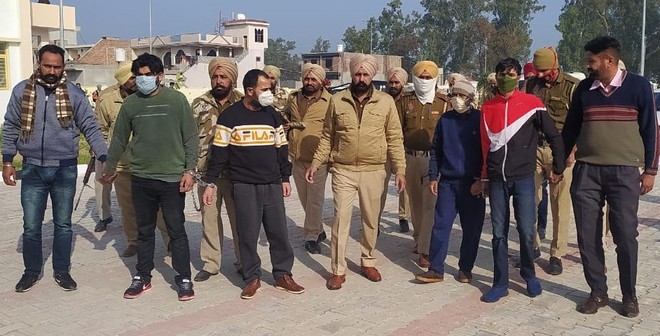 They were produced in a Patti court, which remanded them in five-day police custody. The five men included shooters Gurjit Singh, alias Bhaa, and Sukhdeep Singh, alias Bura, besides three gangsters — Shabbir Ahmad, Ayub Pathan and Riyaz — all residents of Kashmir. They were arrested by the Delhi Police from the Shakarpur area of national capital on December 7 after a brief exchange of fire. The police had said they were linked to terrorist group Babbar Khalsa.

The Tarn Taran police are yet to get custody of Sukhmeet Pal Singh, alias Sukh Bhikhariwal, the mastermind in the murder case, from the Delhi Police. He was arrested by the Dubai police and deported to Delhi a few days ago. Interrogation of the five suspects was crucial to solving the case. The local police had earlier arrested 11 suspects but were hesitant to disclose the motive behind the killing. The weapon used in the crime, too, was yet to be recovered.

While the district police suspected family’s personal enmity with the gangsters as the cause of the killing, the kin said it was the handiwork of radical elements linked to ‘Referendum 2020’. The Delhi Police also supported the family’s claim. A police officer said interrogation would be key to finding the motive and establishing suspects’ links to radicals. Earlier, the district police had gone to Delhi twice to bring the two shooters on production warrant.