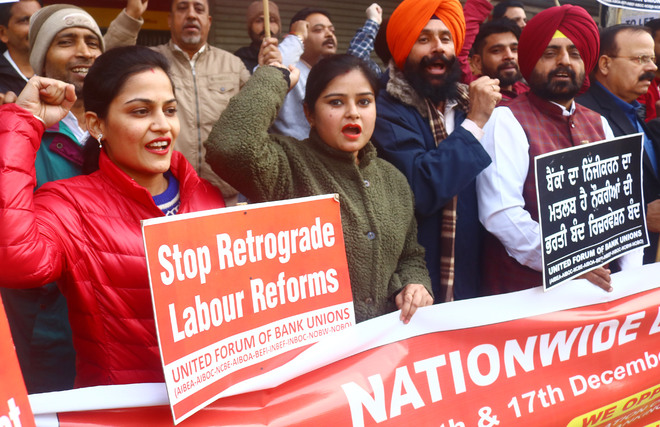 Bank employees raise slogans during a protest in Patiala.

Bank employees, who have been on a two-strike on a call given by the United Forum of Bank Unions (UFBU), staged a protest in front of a branch of the Union Bank in Bathinda.

The protesting employees raised slogans against the union government’s alleged decision that would pave way for privatisation of banks.

Union secretary Amandeep Singh said: “The union government wants to privatise public sector banks and a Bill has also been tabled in the parliament to that effect. Nationalised banks have played a major role in the development of agriculture, small trade, small business, transport and uplift of weaker sections of the society. Way back in 2008 when the world economy was plunged into a deep financial crisis and meltdown, it was PSBs, which helped the Indian economy to sustain and privatising them means handing over people’s money to private vested interests.”

“Bad Loans and NPAs in the banks have been increasing each year because of corporate defaulters. Instead of taking action on them, the government wants to white wash the balance sheets by shifting these bad loans from the books of the banks. This will only benefit corporate defaulters and remove all bad loans from public glare and silently write them off,” he said. — TNS