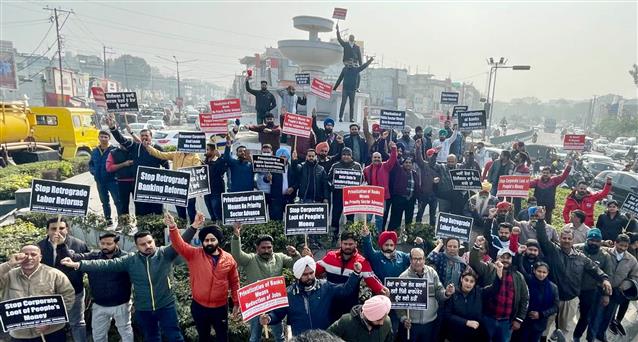 Bank employees today continued with their protest against privatisation for the second day in Bathinda. A call for the strike was given by the United Forum of Bank Unions (UFBU), an umbrella body of nine bank unions.

The strike crippled all financial transactions and business in the Bathinda region, as customers faced problems in cash withdrawal, deposit, cheque clearance and remittance service. Bank workers raised slogans against the Centre and opposed the government’s proposal to privatise some state-owned banks.

A two-day nationwide strike was announced by the UFBU, after a reconciliation meeting with the Additional Chief Labour Commissioner failed on Wednesday. The unions had been protesting since the Centre showed its intention to privatise two public sector banks, in its 2021-22 Budget.

“We have reiterated our position that the Bank Privatisation Bill (Banking Law Amendment Bill, 2021) will not be introduced during this session of the Parliament,” said UFBU convener Sanjeev Kumar. The strike could have been avoided had the government given us any assurance.

Ramandeep Singh, Deputy General Secretary, Bathinda SBISA, said privatisation of PSBs would close bank branches in rural and backward areas. This will affect the implementation of all government schemes designed for the welfare of the socially and economically weaker sections.

Pankaj Kumar, Regional Secretary, Bathinda SBISA, said the government was knocking on the door of PSU banks (like SBI) to save private sector banks through investment. The strike was successful on both the days. Prior to the strike, several state-owned banks had informed their customers to use internet/mobile banking for transactions during the strike.

A dharna was also staged outside a Union Bank branch in Bathinda on Friday. Around 600 bank employees from across the district, gathered and raised slogans against the government. — TNS