Biden's speechwriter has roots in Telangana 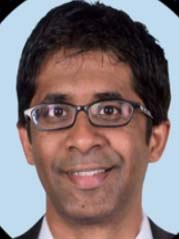 A remote village in Karimnagar district, some 200 km from the state Capital Hyderabad, is waiting to hear the Joe Biden deliver his speech after taking over as the as the next President of the United States of America. The euphoria is not over the swearing-in ceremony, but what the next US President would say because it is their kin who will be writing what Biden says.

Villagers of Pothireddypeta in Karimnagar feel elated because Cholleti Vinay Reddy, who has roots in the village has been appointed as the director of speechwriting of the new US President. The first-ever Indian American to be appointed as a presidential speechwriter was raised in Dayton, Ohio and was the chief speechwriter to Biden during his second term as the vice president of the US from 2013 to 2017.

Vinay father, Narayana Reddy grew up in the village and moved to the US after finishing his MBBS in 1970. But he still keeps close contact with the village, where the Reddy family owns 3 acres of land and a house in Pothireddypeta. Narayana and his wife Vijaya visited the village in February 2020, just before the pandemic lockdown.

Vinay Reddy's grandfather Thirupathi Reddy was the village sarpanch for several years. Cholleti Sai Krishna Reddy, a relative of Vinay, who look after the family lands said, "It's a matter of pride not just for our family but the entire village that our son has risen to such an important position in the US."

He said Vinay was the middle of the three sons and studied in Ohio public schools from kindergarten to Miami University to The Ohio State University College of Law. He currently lives in New York with his wife and their two daughters, the family told local media.