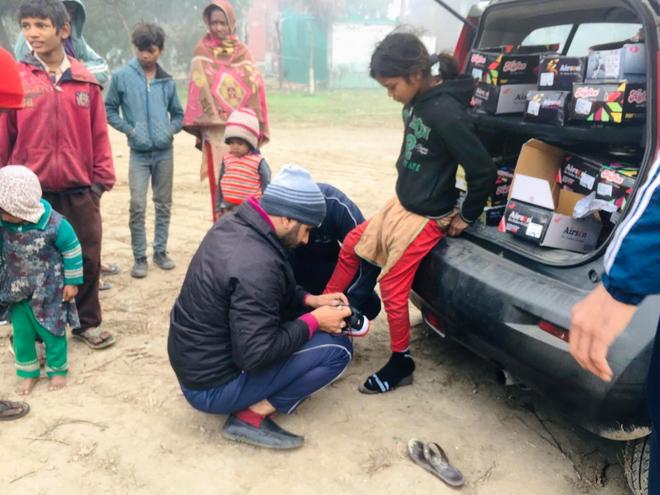 NGO ‘Rise to Help’ is providing footwear, sweaters, socks and caps to the needy.

Gurdaspur: On Republic Day, when Deep Sidhu became the “villain”, several BJP leaders went into overdrive to reach out to the media. They ostensibly wanted the press to refrain from reporting the “once cozy” relationship between Sidhu and MP Sunny Deol. In the run-up to the 2019 General Election, residents recalled how Sidhu scouted the constituency to ensure the actor got a decent accommodation. He finally found a house in Nawa Pind Hundal, on the banks of the UBDC canal, in Dhariswal. Deol stayed there during his campaign and was joined by father Dharmendra and brother Bobby Deol later. After Sidhu’s antics at the Red Fort, some party leaders obviously feel no necessity in jogging residents’ memory. But locals already know a lot, and there are others who say they can disclose more, if the need be.

Fazilka: Established in 1913, Government Girls Senior Secondary School, Fazilka, has been provided with new educational parks to offer latest techniques to 2,080 students. Most of the girls come from villages in the border area. Principal Sandeep Dhuria said science, social studies and maths parks had been set up at the school, which had imparted education to many successful women, including Meera Chadha Borwankar, the first female IPS officer, who heads the Mumbai Police crime branch. Dhuria said 22 new rooms and a new science lab had also been set up.

Fatehgarh Sahib: Local NGO ‘Rise to Help’, which has been in the limelight for launching ‘Green Fatehgarh Sahib’ campaign and setting up a library at the Singhu border for the farmers, has come up with another idea of providing footwear, sweaters, socks and caps to the needy. The volunteers visit slum areas, railway stations, footpaths, bus stands and temples to look out for the needy. These Good Samaritans don’t hanker after name and fame, as helping the ones in distress is their sole mission.