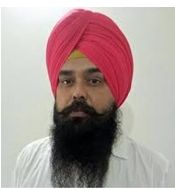 In the first major dissent within the BJP over the new farm legislations, party’s Punjab general secretary and core committee member Malwinder Kang today resigned from the primary membership of the party.

In his resignation letter to BJP state president Ashwani Sharma, Kang reasoned that “the farmers, arhtiyas and small traders were rightly and democratically protesting the new Acts passed by the Union Government”.

He said he had raised the issue in support of farmers at the core group meeting of the party and called for party’s state and central leadership to “address the grievances of the protesters.”

Azaad said the villages had taken the decision to express solidarity with the farming community. “We can feel their pain. The villages have decided to boycott all BJP leaders, including the PM, whose government has enacted the anti-farmer laws,” said Azaad. Mission members on Saturday held a protest march against the NDA government. OC