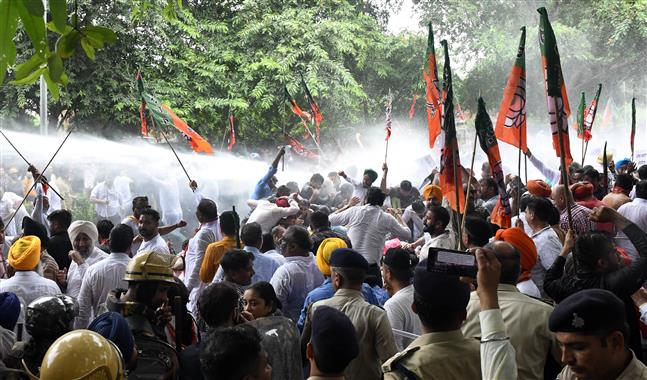 Police use water cannons on the protesting BJP activists at Sector 37 in Chandigarh on Thursday.

Flaying the AAP government for its failures, BJP workers today tried to march towards Chief Minister Bhagwant Mann’s residence, but were detained just outside the party’s state headquarters in Sector 37 here.

Initially, the BJP had given a call to gherao the Punjab Legislative Assembly during the special session called by the AAP government on Thursday. However, after assent to the session was withdrawn by the Governor, the BJP said they would protest in front of the CM’s residence instead of the Vidhan Sabha.

Workers from across the state had started gathering at the party’s state headquarters morning onwards. The workers led by its state leadership first held a meeting in front of its office, where speakers criticised the government for indulging in theatrics instead of fulfilling its poll promises. Then they started a march towards the CM’s house.

But, the police, which had barricaded the entire area, stopped them just outside the party office on Dakshin Marg. They used water cannons, which led to minor injuries to some BJP workers and took several, including state chief Ashwani Sharma, into preventive custody.