Post breakup, core committee resolves to expand base in state 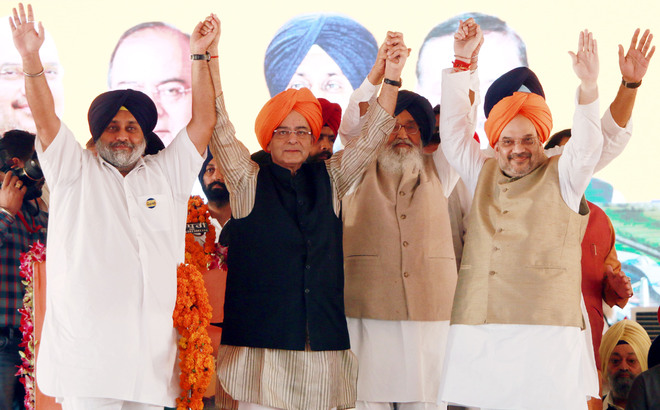 The BJP core committee that met here today resolved that the breaking of alliance with the Akalis was sad, but a blessing in disguise for the party to finally expand independently in the state.

State party president Ashwani Sharma said the core committee took stock of the political situation in the state and the country over the farm legislations and the end of alliance with the Akalis.

“We agreed it was sad that Akalis had parted ways with us. They seem to have been caught in the propaganda started by the Congress, Left and AAP over farm legislations,” said the state BJP president.

He said the committee found the development an opportunity to strengthen its base as well as expand it in new areas. The BJP had remained more focused on 23 out of 117 Assembly seats in the state as per the ratio of seat understanding with the Akalis. Sharma said the party cadre was raring to develop the party.

He said the committee noted that the BJP had always respected the interests of the alliance partners and never snapped ties with anyone. “We were never the first to walk out of any alliance. We have always believed in taking everyone together,” he said.

Sharma said with the beginning of procurement of paddy and later of wheat next year would clear all misgivings of the farmers and confirm that the new legislations were beneficial. Senior BJP leader and former Union Minister Vijay Sampla, too, in his tweet said it was unfortunate that the SAD came out of the alliance with the party.

“But every challenge also brings a new opportunity. I believe that this move of the SAD, which is already facing internal strife, will never be fruitful in the future,” tweeted Sampla. Senior BJP leader Manoranjan Kalia said initially, the Akalis had been supporting the farm Acts and had also said they were favourable to the farming community.

We came together to fight against the atrocities of the Congress. The Shiromani Akali Dal was always consulted on issues of farmers. But this time, the BJP didn’t listen to our concerns on farm issues. Balwinder Singh Bhunder, SAD senior leader

‘We have always respected our allies’

The BJP has always given respect to every party associated with the NDA. The SAD is a political party and they chose another line. We have never been the first to walk out of any alliance anywhere in the country. Ashwani Sharma, State BJP President

‘The breakup is just political theatrics’

This breakup is just political theatrics. The Akalis were signatories to the ordinances. They did not quit the NDA when these were proposed or presented in Parliament. They have done so now only to save their vote bank. Harpal Singh Cheema, Leader of Opposition