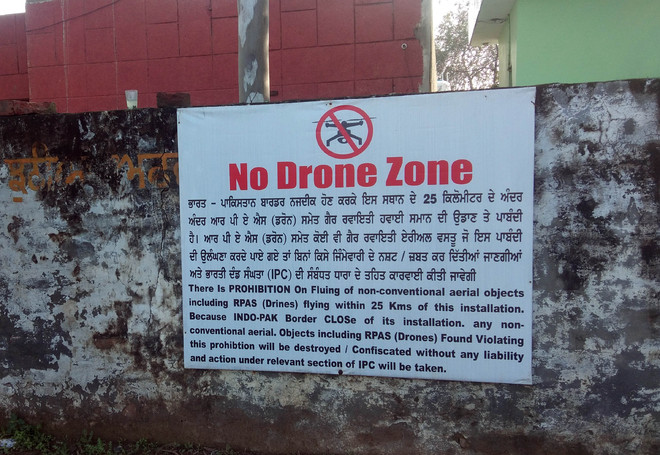 A notice declaring border areas as ‘no drone zone’ put up outside Gharinda police station, near Amritsar. Tribune photo

The state police have banned the use of remote piloted aircraft system (RPAS) or unmanned aerial vehicles (UAVs), commonly known as drones, in areas adjoining the India-Pakistan border across the state. The radius of 25-km near the border has been declared “no drone zone” and notice boards have been installed outside all police stations in these areas.

The police have warned that if anyone is caught violating the order, strict legal action will be taken. The police have made it clear that no one is allowed to use drone even for shooting films. If anyone wants to shoot any occasion, prior permission is mandatory.

Amandeep Singh, SHO, Gharinda, said, “The use of drones in border areas is totally banned. No one is allowed to use drones even for amusement. If wedding photographers want to shoot a ceremony, they have to seek permission. We have increased surveillance in the border villages and appealed to the public to cooperate and inform the police about the sighting of any drone activity.”

Meanwhile, widening the probe into the narco-terror module, the police have named the brother of Army man Rahul Chohan of Ambala. He has been identified as Rohit Chohan.

Amritsar rural police chief Vikram Jeet Duggal today confirmed the development, saying efforts were on to nab the accused. “His arrest is likely to throw more light on the modus operandi of cross-border smugglers,” he said.

It is learnt that Rohit had helped his brother in procuring the drone, which was used for smuggling heroin from across the border. The drone was sent to Pakistan by Rahul for fetching the contraband. He had also trained other smugglers in operating drones. Rohit also helped in concealing the drone when the module was busted by the police.

A police official associated with the investigations said more names had cropped up during the interrogation of five members of the gang arrested so far. Besides Rahul, the police had taken the custody of three jail inmates, including Balkar Singh, the kingpin of the nexus, who is serving a sentence in a smuggling case.

Others arrested are Dharminder Singh of Dhanoe Khurd village, Lakhwinder Singh and Sarvan Singh (both lodged in jail).

As per the probe, the module has been active since July last year. The officer said, “We are still identifying the upward and downward links of the drug cartel. Raids are on to nab those who have been identified.”

Ferozepur: The BSF seized four packets of heroin weighing 3.080 kg in Ferozepur and Abohar sectors. The troops seized two packets, weighing 1 kg, from an area near border outpost Kassoke along the border in Ferozepur. In another seizure, the BSF troops noticed some movement near fencing in Abohar sector, following which they opened fire towards them. The smugglers managed to escape. Later, two packets of heroin, weighing 2.08 kg, were recovered. oc