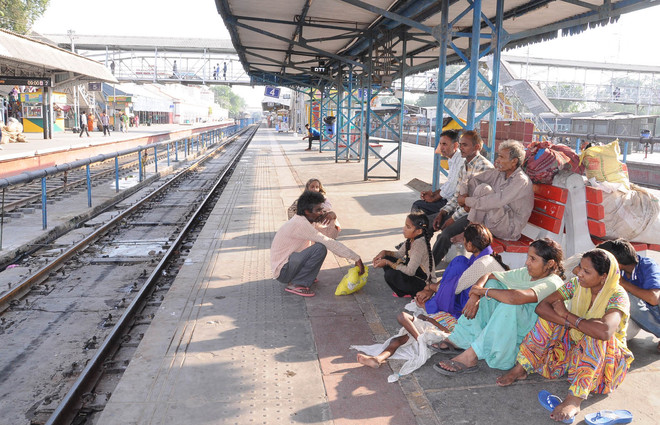 Patients wait for the ‘cancer train’ in Bathinda. - File photo

Cancer treatment in the region took a massive hit during the Covid lockdown as the Abohar-Jodhpur Express, also known as the ‘cancer train’, has been lying suspended for nine months.

As a result, many patients have not been able to travel to Bikaner for treatment. These patients have shifted their treatment to the Advanced Cancer Institute at Bathinda and Guru Gobind Singh Medical College at Faridkot.

My father was having health issues during the lockdown but most hospitals turned us away. Later, when we got him checked, he was diagnosed with cancer.

Due to this, the Bathinda institute has witnessed a huge rush of patients. The conditions at the institute have become such that minor surgeries have been stopped to clear the backlog of major surgeries. The most remarkable feature of this train was that 60 per cent of its passengers were cancer patients of all ages who came from all across Punjab. On an average, the train was the lifeline of 100 cancer patients daily along with 200 other co-travellers. It was almost always packed to near capacity.

The ticket was priced at Rs 210, but for cancer patients, the eight-hour journey to Bikaner was free. One accompanying attendant got a concession of 75 per cent.

Even after the lockdown was relaxed gradually, the fear of Covid infection kept cancer patients away from hospitals. Those who sought treatment didn’t get it because of health systems prioritising Covid treatment. A floor of the cancer institute was made a Covid ward. Later, it was shifted after a hue and cry was made over the issue.

Angrej Kaur of Maur had to face problems due to the lockdown. She was getting treatment of breast cancer from a hospital in Bikaner, but due to the stopping of the train, she had to get her surgery done from the Advanced Cancer Institute.

Gurpreet Singh of Bathinda city said, “My father was having health issues during the lockdown but most hospitals turned us away. Later, when we got him checked, he was diagnosed with cancer. Had he been tested earlier, we could have controlled cancer at an earlier stage.”

“The disease has advanced in among 10 per cent patients who could not come to the hospital because of the pandemic,” said Dr Deepak Arora, Director, Advanced Cancer Institute, Bathinda.