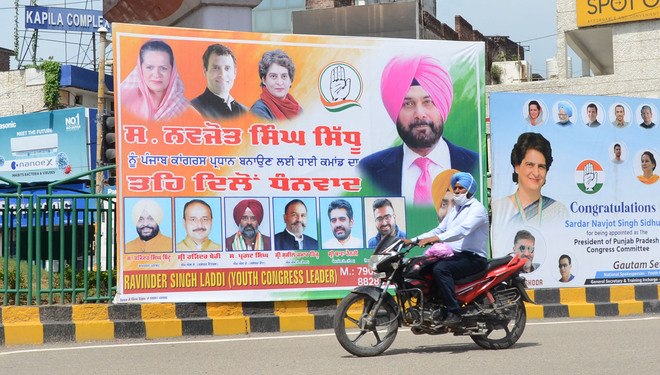 Hoardings installed in the city with congratulatory messages for Navjot Sidhu on being appointed as the PPCC chief do not bear pictures of Punjab CM. Sarabjit Singh

Even as a fierce war is on between Punjab Chief Minister Capt Amarinder Singh and the new PPCC chief Navjot Singh Sidhu, some local workers are perhaps fuelling it further with their actions.

The new hoardings with congratulatory messages for Sidhu that are coming up across the city are without any pictures of the Chief Minister. These hoardings are otherwise big enough to bear the pictures of AICC leaders, including Sonia Gandhi, Rahul Gandhi, Priyanka Gandhi and all local MLAs, but the sponsors perhaps deliberately chose not to put the pictures of the CM as a part of the exercise to appease Sidhu.

The posters put by Jalandhar councillor Rohan Sehgal have a bold picture of Jalandhar Cantt MLA Pargat Singh, whose patronage he enjoys. It bears a tag line, ‘Sirjange nawan Punjab (we will create a new Punjab), Team Navjot Singh Sidhu’.

Another kind of hoarding in the city, put up by Youth Congress leader Ravinder Singh Laddi, even has the picture of PUNSUP chairman Tajinder Bittu and National Youth Congress Spokesperson Gautam Seth among the AICC and the state leaders, but not that of the CM.

The party’s senior leaders today commented on the issue saying: “It is because of such workers who keep instigating one camp that the dividing lines between two factions in the party have deepened further. While it was a mistake or a failure of the party high command to have not called in both the fiercely fighting leaders, including the CM and the new PPCC chief together while making the announcement, the local workers were further instigating the matter and indulging in such actions that have been causing irritation to the rival camps”.