A Congress hoarding in Malout 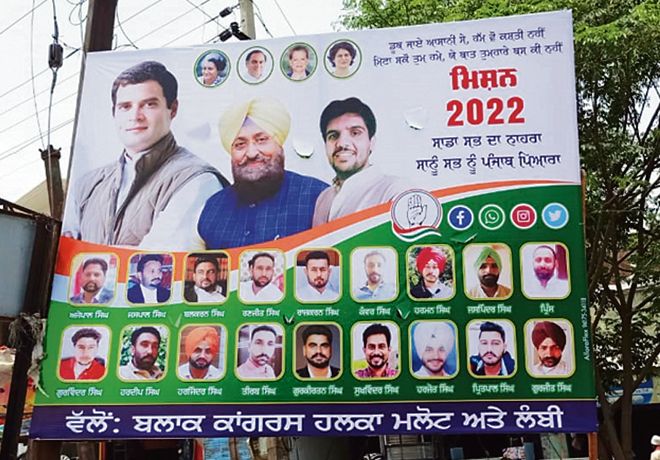 A Congress hoarding in Malout.

Amid a political crisis in the state Congress, some hoardings of ‘Mission 2022’ of the ruling party have come up in Malout town in which both Chief Minister Capt Amarinder Singh and PPCC chief Sunil Jakhar are missing. Strangely, a big photograph of former PPCC chief-cum-MP Partap Singh Bajwa can be seen along with a picture of Rahul Gandhi on the hoardings.

Besides, the photos of former PMs Indira Gandhi and Rajiv Gandhi, AICC chief Sonia Gandhi and Priyanka Gandhi Vadra are placed on the on the top of the hoardings. On this, Baljit Singh Chahal, spokesperson of the PPCC, said, “The Congress workers of Malout and Lambi Assembly segments have installed these hoardings with my photo on it. Basically, the Congressmen in these constituencies are feeling sidelined. We are not against any leader. But it is a fact that Capt Amarinder Singh, after contesting the Assembly election from Lambi, did not come here for even once. The party leadership did not even appoint any representative of the Lambi Assembly segment.” — TNS