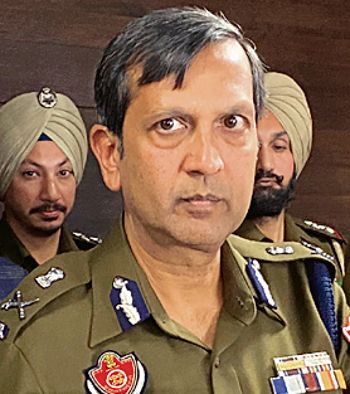 In a setback for Capt Amarinder Singh government, the Central Administrative Tribunal (CAT) today set aside the appointment of Dinkar Gupta as the Director General of Police, Punjab.

“The entire selection process and consequential appointment of Dinkar Gupta is contrary to the judgment of Supreme Court in Prakash Singh’s case,” read the order passed by the Bench comprising Justice L Narasimha Reddy and Mohd Jamshed.

The order came on petitions filed by Punjab-cadre IPS officers Mohd Mustafa and Siddharth Chattopadhyaya, both of whom DGPs, wherein they had challenged Gupta’s appointment on the ground that they were “ignored” despite being senior to him. On February 7, 2019, the Punjab Government had appointed Gupta as the DGP on the basis of the recommendations made by the Empanelment Committee constituted by the UPSC.

During trial, DS Patwalia, counsel for Mohd Mustafa, contended the UPSC, the Department of Home Affairs, Punjab, and Empanelment Committee had deviated from the factors required for selection such as the length of service, very good record and range of experience for heading the police force.

Counsels for the UPSC and Empanelment Committee stated five core policing areas — intelligence, law & order, administration, investigation and security — were taken into account, and that these were in conformity with the draft guidelines issued by the UPSC in 2009.

Had the committee conducted its activity strictly within the parameters prescribed by the Supreme Court, there would not have been any necessity to make any further scrutiny. However, even from their own admission, the UPSC and committee deviated from the prescribed procedure, stated the Bench.

“Assuming that the core policing areas are relevant in the selection process, it is a matter of record that there existed 20 such areas, which are mentioned in the performance evaluation. The respondents did not indicate any other source from which the areas were selected. It is not even mentioned as to on what basis the five areas were selected and why intelligence in the list of 20, was accorded primacy,” questioned the Bench.

“The procedure adopted by the UPSC and Empanelment Committee for preparation of panel for appointment to the post of DGP, Punjab, is patently opposed to and is violative of the one stipulated by the Supreme Court, apart from being otherwise illegal and arbitrary,” read the order.

CM Capt Amarinder Singh said the matter had to be sorted out between CAT, UPSC and the officer. A government functionary said the state would challenge the order in the HC

The tribunal directed the UPSC and Empanelment Committee to prepare a panel of three senior-most officers strictly in accordance with the SC judgment. The exercise shall be completed within four weeks

What SC judgment says on selection

The DGP shall be selected from among three senior-most officers empanelled by the UPSC on the basis of length of service, very good record and range of experience for heading the police force