CM to lay stone of Jallianwala memorial, BJP opposes it : The Tribune India

CM to lay stone of Jallianwala memorial, BJP opposes it 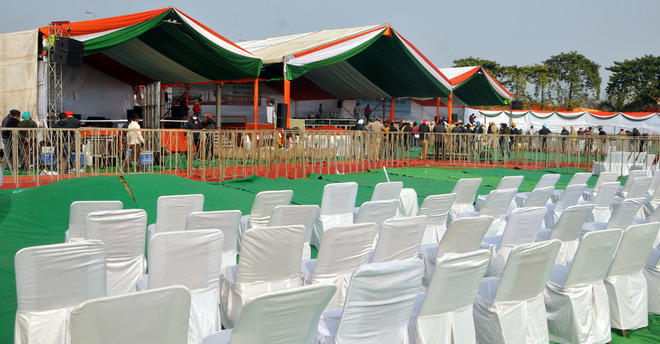 The ceremony stage being decked up in Amritsar. Vishal Kumar

Amid criticism, the stage is set to erect a ‘parallel’ memorial to mark the centenary of the 1919 Jallianwala Bagh massacre at Anand Amrit Park at Ranjit Avenue, Amritsar.

If everything goes according to the plan, CM Capt Amarinder Singh will lay the foundation stone of the proposed memorial tomorrow in the presence of Punjab Tourism and Cultural Affairs Minister Charanjit Singh Channi. Recently, the Office of the Deputy Commissioner, Amritsar, had uploaded a list of 492 Jallianwala Bagh martyrs on its official website and endeavoured to approach their kin for the occasion.

The memorial has been designed by the state Architecture Department. The memorial at the original site was built by the Government of India in 1951 and is run by Jallianwala Bagh National Memorial Trust headed by the PM. The plan of two memorials in the same city has not gone down well with the trust members. Rajya Sabha MP Shwait Malik said, “I wonder why was there a hitch for the CM to erect the memorial inside the original site.” Congress MLA Raj Kumar Verka said there was no objection over erecting memorials at multiple places. — TNS

Victims included both children and adults, police say in a s...