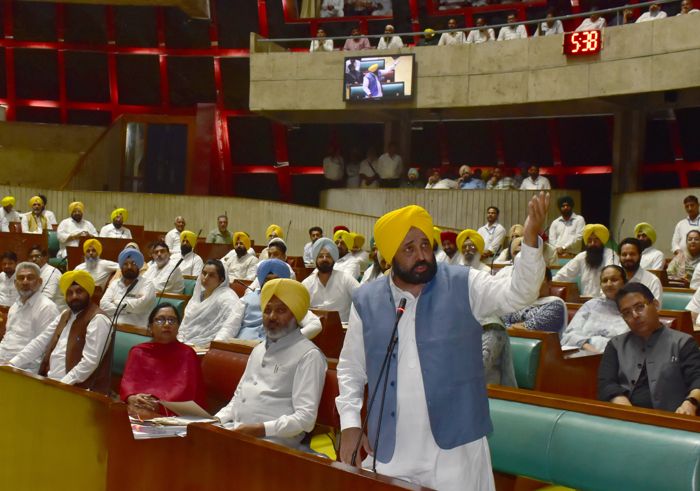 Congress legislators, led by Leader of the Opposition Partap Singh Bajwa, cornered the Aam Aadmi Paty (AAP) government in the Punjab Assembly today over the delay in allowing government buses to ply till Indira Gandhi International Airport. He asked why the buses were allowed only in June this year even though the Congress government had approached the Delhi Government at least 13 times during its tenure.

Bajwa said, “We will like to ask why the buses were allowed to start only on June 15 this year even though the Congress government had approached the Delhi Government at least 13 times between December 2018 and October 2021. We were told that the buses had been stopped due to an order of the Supreme Court. Give us a copy of the order.”

Give us copy of SC order

Why the buses were allowed to start only on June 15 even though the Cong government had approached Delhi at least 13 times. We were told that the buses had been stopped due to an SC order. Give us a copy of the order. — Partap Singh Bajwa, Leader of opposition

During Zero Hour, Bajwa again asked the government for copies of the SC orders. if any. The issue was raised again in the wake of an unsatisfactory answer by Transport Minister Laljit Singh Bhullar, who said the previous government was only helping buses of private bus operators.

MLA Naresh Puri spoke on the issue of irregular power supply in different areas of kandi. Minister for Power Harbhajan Singh denied any power shortage in the area. Puri replied that there were certain areas in Doaba which did not receive supply for four to six days due to unannounced cuts or a technical fault. MLA Raj Kumar Chhabewal also highlighted the issue of erratic power supply due to technical snags.

PCC president Raja Warring spoke about a large number of villages continuing to face the problem of stagnant water in ponds, which had no safe outlet. Accepting the ground reality, Minister for Rural Development and Panchayats Kuldeep Singh Dhaliwal said the matter was being looked into. An AAP MLA demanded an inquiry into the misutilisation of MNREGA funds and failure to clean village ponds during the tenure of the previous government.

The election to the post of the Deputy Speaker will be held in the Vidhan Sabha on Thursday. A notice in this regard has been issued. Sources in AAP say one of the second-time MLAs could be considered for the post.