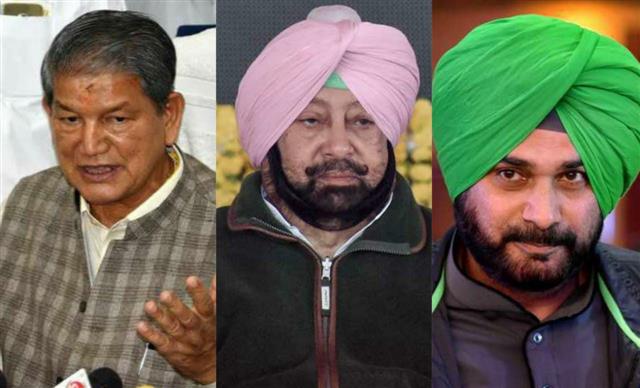 In a major political development related to the ongoing tussle in Punjab Congress, party high command has convened a meeting of the Congress Legislature Party (CLP) here on Saturday. The CLP meeting could spell trouble for Capt Amarinder Singh, who has been at the target of rebel leaders seeking his ouster.

In a late night development, Punjab Affairs in charge Harish Rawat took to Twitter to make the announcement,” The AICC has received a representation from a large number of MLAs from the congress party, requesting to immediately convene a meeting of the Congress Legislative Party of Punjab. Accordingly, a meeting of the CLP has been convened tomorrow at 5 pm tomorrow”, he tweeted.

The AICC has received a representation from a large number of MLAs from the congress party, requesting to immediately convene a meeting of the Congress Legislative Party of Punjab. Accordingly, a meeting of the CLP has been convened at 5:00 PM on 18th September at .....1/2 pic.twitter.com/BT5mKEnDs5

Sources said the notice for the meeting was deliberately served late so as to give little time to the CM camp to `react’. The central team is likely to take signatures of the MLAs, authorizing the parry high command to decide the next course of action.

Minutes after Rawat  tweet, PPCC chief Navjot Sidhu also took to the micro-blogging site informing about the meeting. ``As per the AICC directive, Congress Legislative Party meeting has been convened at PPCC Office, Chandigarh tomorrow at 5 pm.’’

As per the AICC directive, Congress Legislative Party meeting has been convened at @INCPunjab PPCC Office, Chandigarh on 18 September 2021 (Saturday) 5 PM.

In backdrop of the tussle between the CM and rebels, Navjot Singh Sidhu was made the PPCC chief. But the impasse continues between the warring factions, forcing the party leadership to interfere yet again. The MLAs, including some Ministers have been training their guns at Capt Amarinder Singh for delay in implementation of the 18-point agenda handed down by the party high command to Chief Minister Capt Amarinder Singh in the run up to the 2022 assembly elections. The Rebels have been trying to send signed representations to party high command, stating that it was affecting  their winning prospects in the coming elections.

In party circles, the move is being as direct intervention of the party leadership to address the concerns of the rebels, who had few weeks ago sought CMs ouster. The Chief Minister during a recent interaction with Navjot Singh and his four working Presidents had pointed out that all the key issues of concern raised by the PPCC chief were already in advanced stages of resolution.

Sources point out that any Intervention of the party high command at a time when the Chief Minister is in a comfortable position vis a vis his opponents within the party could have different ramifications for the  faction prone Punjab Congress.  Rawat during his recent visit had tried to diffuse the tension while advising CM and the PPCC chief Navjot Singh to work as a team.