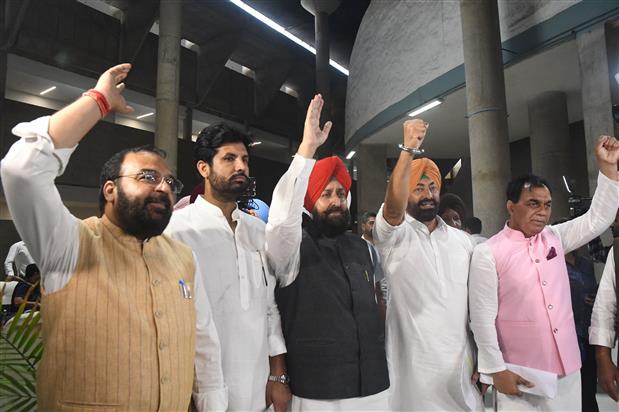 Congress leaders protest outside the Vidhan Sabha in Chandigarh on Tuesday. Tribune photo

Adopting an aggressive posturing on the opening day of the Vidhan Sabha session, Congress MLAs led by Leader of Opposition Partap Singh Bajwa displayed a coordinated floor strategy in countering the confidence motion tabled on the floor of the House by Chief Minister Bhagwant Mann.

Raising their tone in spite of numerically insignificant numbers, the Congress MLAs made their presence felt in the House as the CM moved to introduce the confidence motion. Of the 18 party MLAs, 15 were present.

Partap Singh Bajwa has urged the Governor to censure CM Mann for misleading him and the House on the confidence motion. He demanded an FIR should be registered against the CM.

If the AAP government is so keen to prove its majority in the Assembly, CM Mann must hold fresh elections. Why would the BJP topple your government as you are its ‘B team’? —Amrinder Singh Raja Warring, PCC chief

By dragging the discussion on the confidence motion, the AAP government wants to devote little time to discussion on other burning issues ofthe state. — Congress MLA

Unable to proceed with the confidence motion, Speaker Kultar Singh Sandhwan had to adjourn the proceedings thrice before naming the Congress MLAs for the day.

Bajwa condemned the government for bringing in the trust vote in “violation of the legislative rules”.

“No rule allows the government enjoying the majority to move a confidence motion,” he said, reminding the Speaker that there was no discussion on the motion during the Business Advisory Committee meeting.

State Congress chief Amrinder Singh Raja Warring, former Deputy CM Sukhjinder Singh Randhawa, Bholath MLA Sukhpal Khaira and other party MLAs tried to counter the offensive by treasury bench MLAs. As the CM rose to initiate the discussion on the confidence motion, Bajwa did not relent and continued to lead the charge against the treasury benches.

The Congress MLAs stormed the Well of the House raising slogans before being named by the Speaker. Subsequently, the House was adjourned. After leaving the House, the MLAs staged a sit-in outside the Vidhan Sabha and conducted a mock session with Randhawa as the “Speaker”. 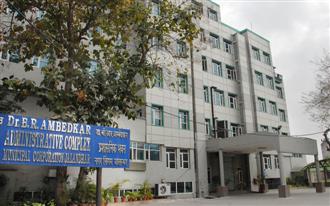