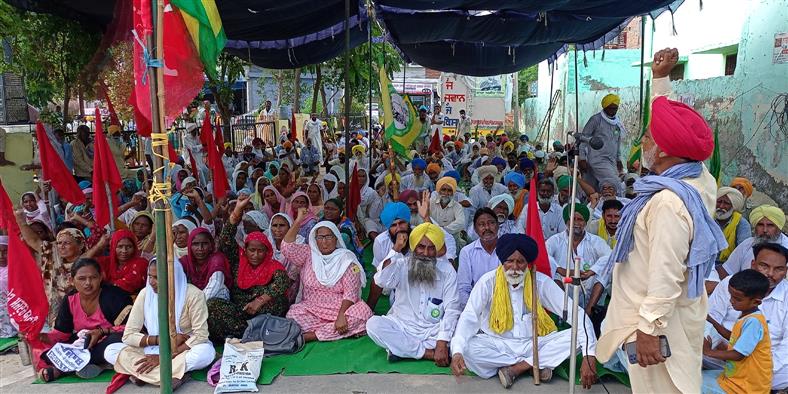 The Punjab Khet Mazdoor Union and the Bharti Kisan Union (Ekta Ugrahan) today began an indefinite protest outside the Muktsar District Administrative Complex, demanding compensation for the cotton crop, which got damaged due to pink bollworm attack last year.

The protesting farmers said Chief Minister Bhagwant Mann had assured them numerous times about the relief, but nothing has happened so far.

In March, farmers had held captive a naib-tehsildar, some patwaris and other employees at the sub-tehsil office in Lambi for around eight hours.

The police had allegedly cane-charged the agitators, which resulted in injuries to some farmers.

On March 29, the Revenue Department’s officers and clerical staff had gone on a strike across the state.

Today the protesters demanded cancellation of the case registered against them. Yesterday, the Agriculture Department’s pest surveillance teams had detected whitefly above the economic threshold level (ETL) in 13 cotton fields in the district. Besides, it found 12 pink bollworms in seven cotton fields.

Gurpreet Singh, Chief Agriculture Officer, Muktsar, said, “The situation is normal in Muktsar district. Firstly, the water was not released timely in the canals for irrigation. Secondly, weather remained dry for long. Later, fields got waterlogged due to sudden rain in the district. Our 28 pest surveillance teams are keeping tabs on the cotton crop.”