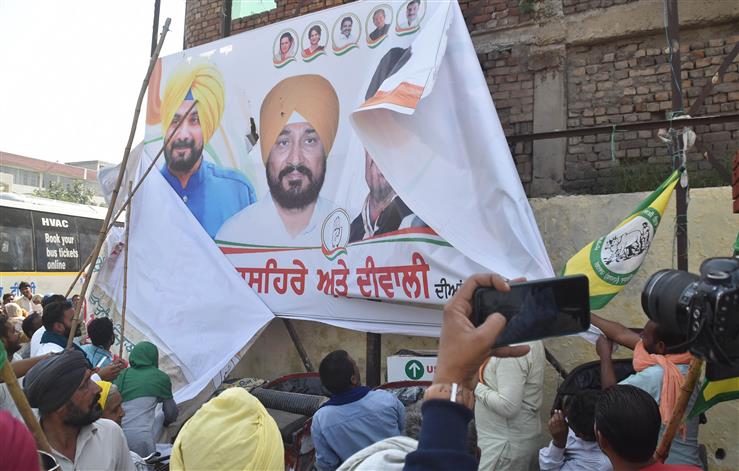 On Day 3 of their protest on Wednesday, BKU (Ekta Ugrahan) activists blackened and tore hoardings of CM Charanjit Singh Channi in Bathinda city. The hoardings show him with farmers in cotton fields and claim “adequate compensation” for damaged cotton crop. Farmers also removed other hoardings showing CM and his government’s achievements.

BKU leaders said when farmers had not been compensated, the Chief Minister’s hoardings claiming otherwise was like rubbing salt into their wounds. “We will not allow the government to do politics and spread lies,” they said. BKU (Ekta Ugrahan) general secretary Sukhdev Singh Kokrikalan said they would continue their fight against the government until farmers get the compensation.

Meanwhile, the work at the District Administrative Complex (DAC), Bathinda, remained suspended today, with farmers camping outside the building and not allowing anyone to enter it. — TNS

Deputy Commissioner Arvind Pal Singh Sandhu said: “Alternative arrangements have been made to keep the work going. Even our Progressive Punjab meeting with industrialists at the DC office meeting hall was shifted to Maharaja Ranjit Singh Punjab Technical University (MRSPTU) auditorium due to the ongoing protest.