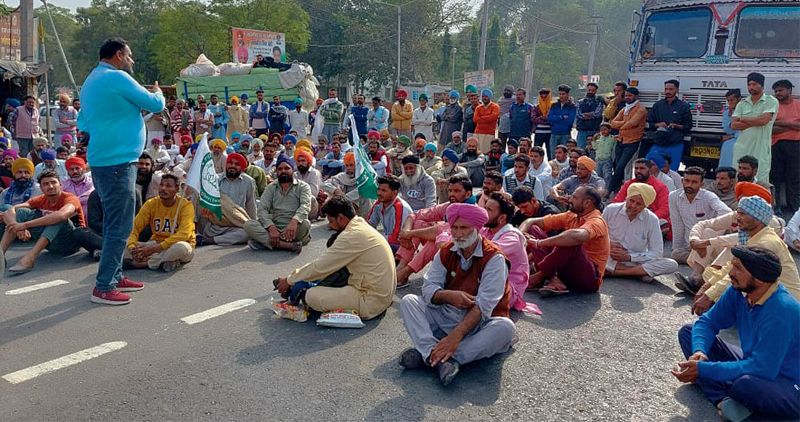 Cotton farmers staged a protest at the grain market in Bathinda today, alleging private players had decreased the prices of the produce in mandis, coercing them to sell the crop on low rates.

Cotton growers have already suffered losses due to the pest attack and untimely rain. If they are not provided remunerative prices, we will start an indefinite agitation soon. Gora Singh, BKU Dakaunda leader

Cotton farmers in Mansa district have not even been getting MSP in some mandis. The growers alleged citing poor quality, private players were quoting a low price (below MSP) for the produce. This at a time when cotton in the Malwa region fetched an all-time high price at Rs 9,400 per quintal this season. The untimely spell of rain coupled with the pink bollworm attack has caused substantial damage to the crop in the region this season, affecting the production.

Sandeep Singh, a farmer from Shergarh village from Bathinda district, said, “The top quality of cotton which I sold for Rs 8,500 on a per-quintal basis just over a week ago is not being sold for more than Rs 7,500 now. We will not accept low rates for the premium quality of cotton.”

Jagdev Singh, another farmer from Jai Singhwala village, said, “Cotton was bought for Rs 9,400 on a per quintal basis just a while ago but now, the prices have been brought down by private players deliberately. They quoted just Rs 7,490 as the highest price for the top-quality cotton brought by me. I refused to sell my produce. If they do not raise the price, I will take the produce to some other mandi and try to sell it there.”

In Mansa district, private players have even bought cotton for as low as Rs 5,200 per quintal which is way below than MSP of Rs 5,925 fixed for this year. Alleging arbitrary approach of private players, cotton growers staged protests in some villages and raised slogans.

A senior official of the Cotton Corporation of India (CCI) said there was certainly a decline in the prices of cotton being procured by private players. He said private players had unanimously formed a ‘pool’ and decided they would not be quoting a higher price than a fixed limit of even the top-quality cotton. Gora Singh Bhaini Bagha, a leader of the BKU Dakaunda in Mansa district, said, “How is it possible that good-quality cotton was fetching Rs 8,500 to even Rs 9,400 per quintal just a few days ago and now suddenly the prices have dropped? Cotton growers have already suffered losses due to the pest attack and untimely rain. If they are not provided remunerative prices for their produce, we will start an indefinite agitation soon.”