On this Baisakhi celebration, the issue of farmers’ protest and three farm laws remained centre-stage 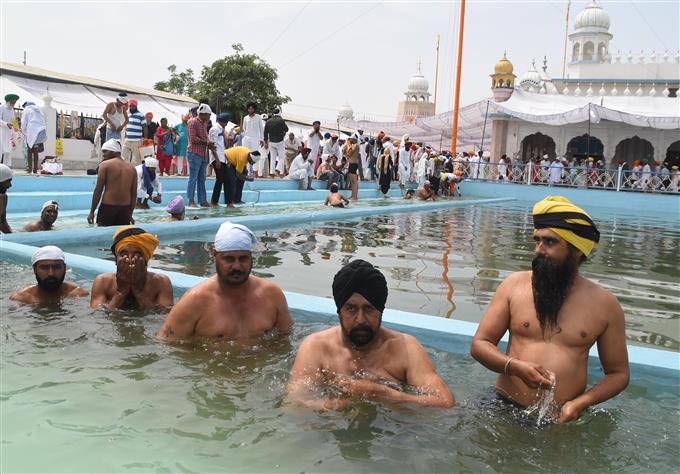 COVID-19 guidelines went for the toss as a large number of devotees paid obeisance and took a holy dip in the sarovar at the historic Damdama Sahib gurdwara on the occasion of Baisakhi, but no social distancing was maintained and hardly people were seen wearing masks.

Even there was no arrangement of thermal scanning.

SAD president Sukhbir Singh Badal, who along with his wife Harsimrat Kaur Badal paid obeisance at Takth Sri Damdama Sahib, had to face protest from a section of devotees.

Devotees standing in a queue started shouting slogans against Sukhbir Badal on seeing him while he was coming out of the gurdwara.

On this Baisakhi celebration, the issue of farmers’ protest and three farm laws remained centre-stage.

While addressing the devotees, Akal Takht jathedar Giani Harpreet Singh accused the BJP-led Union government of working for the benefit of corporate houses and hurting the economic interests of Sikh community.

He said wrong policies formulated by the Union government are behind the economic instability as these policies are made keeping in mind few big corporate families.

He asked people to follow the preaching of the holy scripture. He also appealed to them to shun drugs, keep unshorn hair and stay away from social evils.

Bibi Jagir Kaur said Baisakhi was celebrated across the world wherever Sikhs reside.

She talked about the history of Takht Damdama Sahib and urged devotees to lead their lives on the principles of Guru Granth Sahib.

Besides roadside toy-sellers, eating joints and langar (community kitchen), serpentine queues and a heavy rush of vehicles was seen amid the recitation of religious verses.

Community kitchens were set up at numerous places on the roads leading to Talwandi Sabo.

Other gurdwaras in the city were also decorated on the occasion and witnessed a huge rush of devotees.

The district administration and the police authorities had made elaborate security arrangements and made sure that devotees did not face any inconvenience.

Apart from Talwandi Sabo, a religious function was organised by various gurdwaras in the city to celebrate Baisakhi.