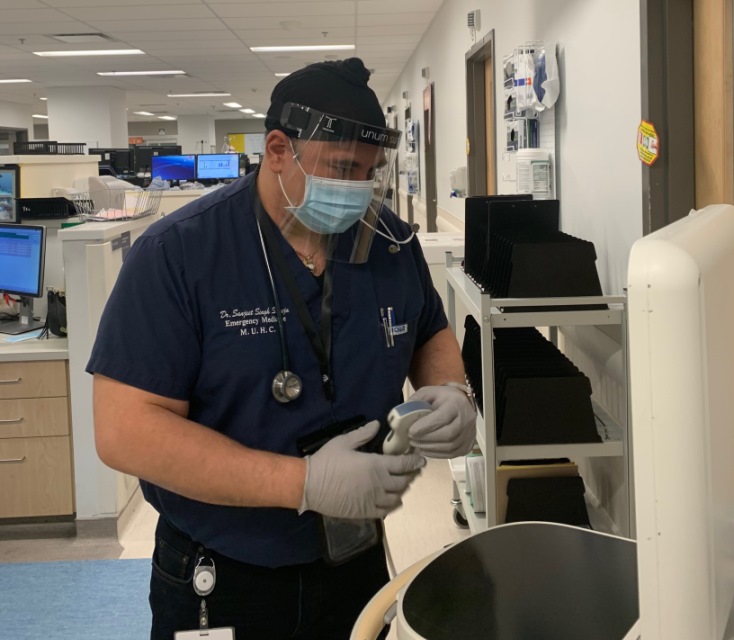 Two Sikh doctor brothers in Canada have made an “extremely difficult decision” to shave off their beards, an article of faith in Sikhism, so as to wear the medical-grade protective masks necessary to treat patients suffering from the deadly coronavirus in the country, according to media reports.

Montreal physician Sanjeet Singh-Saluja and his brother Rajeet, a neurosurgeon at the McGill University Health Centre’s (MUHC) Montreal General and Royal Victoria hospitals, decided to shave their beards after consulting with religious advisers, family and friends, the Brantford Expositor reported.

“As a Sikh man, his beard is an important part of his identity but it was impeding his ability to wear a mask. After much thought, he made the difficult decision to shave his beard off,” the MUHC said in a statement.

“We could choose not to work, but in a time when healthcare workers are falling sick, we would be adding stress to an already taxed system. We could decide to simply refuse to see COVID-19 patients until viable protection is available to us, but that goes against our oath as physicians and against the principles of SEVA,” he said in a video posted on the MUHC website.

“It was an extremely difficult decision for us, but one that we felt was absolutely necessary in this time of need,” Singh-Saluja said.

“It’s a decision that has left me with much sadness. This was something that had been so much part of my identity. I look at myself in the mirror very differently now. Every morning when I see myself, it’s a bit of a shock,” he was quoted as saying by the Montreal Gazette.

“Originally when my brother and I did this, my brother wanted to keep it very quiet and didn’t want any publicity,” Singh-Saluja said, adding that “We still have a really hard time with it,” he said.

Singh-Saluja has dealt with all sorts of outbreaks over the years, but the coronavirus is in a class all its own, and hence the necessity for the N95 mask now.

“But because COVID-19 has become so rampant in our community, it just wasn’t feasible anymore (not to wear a N95 mask). There are so many people coming in. I felt I just couldn’t sit on the sidelines. This was an exception to the rule, so we had to do what we had to do to help out,” he said.

His brother Rajeet was in a similar predicament and would no longer have been able to operate on COVID-19 patients, the report said.

Healthcare workers are coping with the acute shortage of personal protective equipment (PPE) across the world. Canada is facing major medical gear shortage as many countries have restricted exports.

The total number of coronavirus cases in Canada has reached 62,035 with 4,043 deaths, according to the health authorities.

The country’s hardest-hit provinces are Ontario and Quebec. PTI