Even last year, the farmers had to bear losses of around Rs 1 lakh per acre 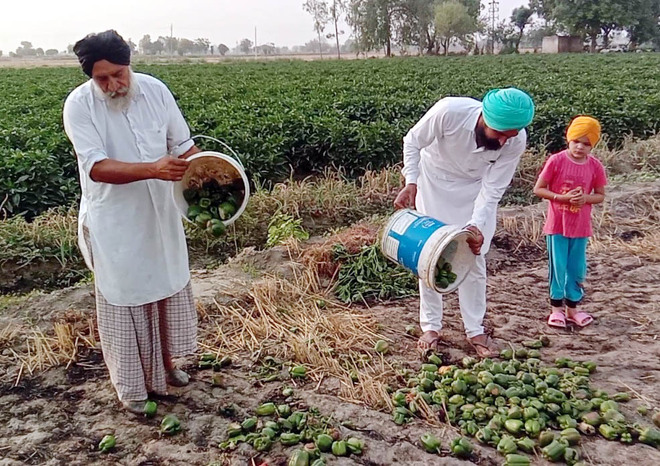 Vegetable growers in Punjab are facing a huge trouble in the wake of a Covid-induced lockdown.

Farmers of Bhainibagha village in Mansa district have cultivated capsicum on 800 acres, but are now unable to sell it. Traders from other states have stopped visiting their farms due to which their produce has started rotting. Left with no option, many farmers have started dumping their damaged produce in the fields or on roads.

Farmers Naib Singh and Satnam Singh say they have grown capsicum this year, but are now unable to sell it due to which the produce has started rotting.

From Punjab, capsicum is supplied to Rajasthan, Uttar Pradesh, Delhi, Jammu and Kashmir, etc. However, traders from those states could not visit Punjab this season due to the imposition of a lockdown, they said.

The Punjab Government should allow traders from other states to visit their farms so that their produce was not damaged, they said.

Even last year, the farmers had to bear losses of around Rs 1 lakh per acre. This year, the government should help them out of this trouble as incurring losses for the second consecutive year would be extremely difficult for them, they said.

“If the situation doesn’t improve, the farmers will not go in for crop diversification. It is high time the government takes steps to help farmers,” said Gurmeet Singh, another farmer.

Mohinder Singh Bhainibagha, district general secretary of the BKU (Dakonda), said traders should be allowed to visit capsicum growers or they would dump their produce outside the office of the Deputy Commissioner concerned.