Not many senior citizens turn up | 1,069 take jab across state 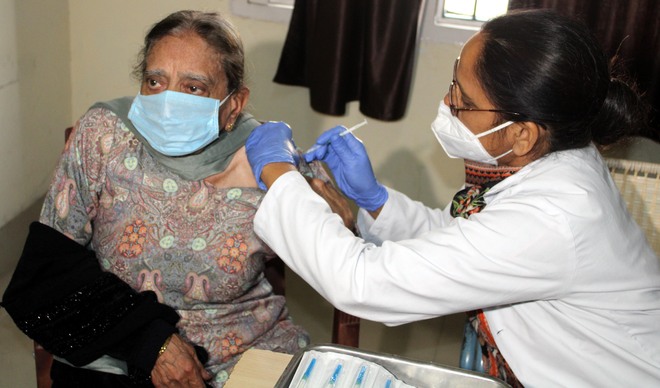 An elderly woman being vaccinated against Covid-19 at a hospital in Amritsar on Monday. Photo: Vishal Kumar

Due to technical glitches in the online registration portal and confusion over registration, just over 1,000 people could be vaccinated in the state.

The second phase of the vaccination drive was launched in the state today under which vaccine was administered to senior citizens and those above the age of 45 and having specified co-morbidities.

However, due to technical glitches in registration, only 1,069 people could be given the dose.

In the state, 1.59 lakh healthcare workers and frontline workers have been vaccinated so far. Confusion prevailed in Jalandhar as some people complained their name didn’t show on the portal despite registration. Not a single of the 72 government-empanelled private hospitals in the district carried out the vaccination process as none of them was registered. Some of the government vaccination centres also didn’t show up on the portal.

In Jalandhar, only 85 persons received the first dose of the Covid vaccine. District Immunisation Officer Dr Rakesh Chopra said, “Due to glitches on the portal, some minor problems were faced today. Many senior citizens turned up at the Civil Hospital, at least 16 of them were registered on the spot. Due to portal problems, we don’t have the exact number of new phase patients reporting today. At least 85 health workers and new phase beneficiaries got vaccinated. At least 20 private hospitals are expected to start operation tomorrow onwards.”

In Patiala, the drive received a tepid response from senior citizens and those above the age of 45 with only 53 taking the jab on the first day.

No special arrangements were made for senior citizens. Though not many elderly persons had turned up, they had to stand in long queues at some vaccination centres because frontline workers were getting their second dose.

Some senior citizens had to turn back following problems in the registration process. Officials of the Health Department admitted that technical faults were reported in some cases.

The state reported 635 cases and 18 deaths in the past 24 hours. As far as deaths are concerned SBS Nagar topped the chart with six deaths, followed by Hoshiarpur with three, Amritsar and Patiala two each, Kapurthala, Ludhiana, SAS Nagar, Pathankot and Sangrur one death each.

85 inoculated in Jalandhar district, 290 in Bathinda