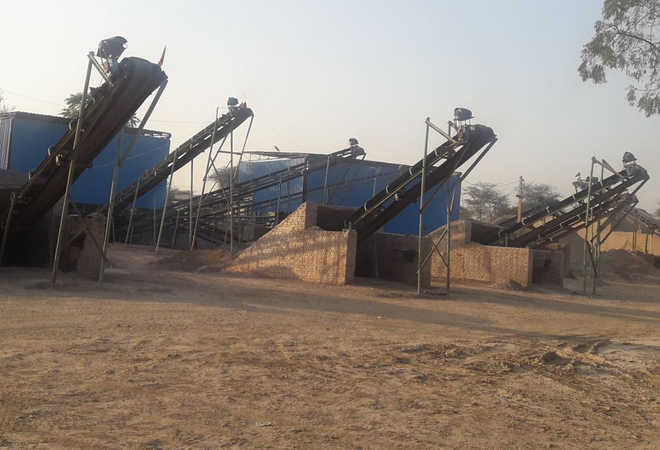 J&K and Himachal Pradesh-based crushing units claimed the Punjab Government was responsible for hiking the rates of mining material in the state by imposing a royalty on processed sand and gravel being transported by them to Punjab and other states.

They claimed this development was in contravention of the orders of the Punjab and Haryana High Court. Nearly 100-odd trucks arrive in Pathankot everyday from these two states.

Rs 7 per cubic feet royalty should be collected from vehicles arriving in Punjab from these two states.

“We approached the HC to stay the notification. Subsequently on July 14, the HC issued a notice of motion and also a notice on the reference of stay to the Punjab Government. The next hearing is scheduled for September 9. However, on August 16, the government again issued a notification, stating that the royalty will remain in effect. Since the matter is sub judice, the August 16 notification should have been kept in abeyance till September 9,” said Parminder Singh, a transporter working for the crushing units.

The unit owners said they were following the “one nation, one tax” rule and were already paying both royalty and GST in both J&K and HP. “Are these two states not part of India?” said Manorathvir Singh, a crusher owner.

An official of the Punjab Government said whatever royalty was being collected is being returned to the miners within 60 days if the documents collected at the inter-state borders are found to be in order by the Department of Mines and Geology.

DC Harbir Singh said the administration was following orders of the government.

The owners said they were left with no option except to pass on the burden of royalty to the consumers.