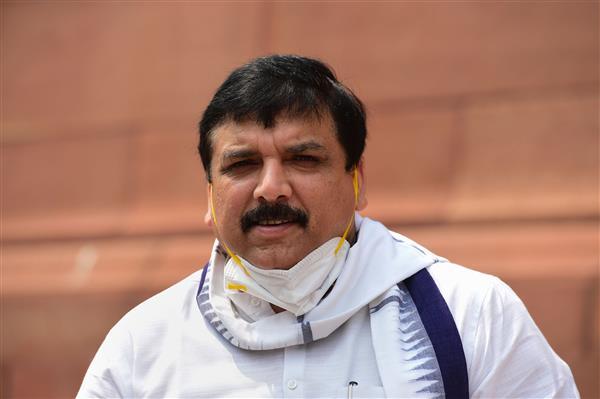 Aam Aadmi Party leader and Rajya Sabha MP Sanjay Singh today surrendered in a local court, a day after it ordered issuance of an arrest warrant over his non-appearance in a defamation case filed by former minister and SAD leader Bikram Majithia.

While surrendering in the court of Additional Chief Judicial Magistrate Harsimranjit Singh, the AAP leader moved a fresh bail application, explaining the reasons for his non-appearance.

Accepting his plea, the court granted him bail with directions to furnish new surety bonds amounting to Rs 1 lakh. After furnishing bail bonds, the court recalled the order of issuance of arrest warrants against him. The case will now come up for hearing on September 17.

On September 6, former SAD minister Maheshinder Singh Grewal, a witness from Majithia’s side, was present in court for cross-examination. Besides, a newspaper official had come with records summoned by Sanjay Singh’s lawyer for confronting the witness with a news item content.

Sanjay Singh was summoned in February 2016. In his criminal complaint, Majithia had alleged the AAP leader made a false and defamatory statement that had role in the drugs trade. The statement was made at a Moga rally on September 9, 2015.