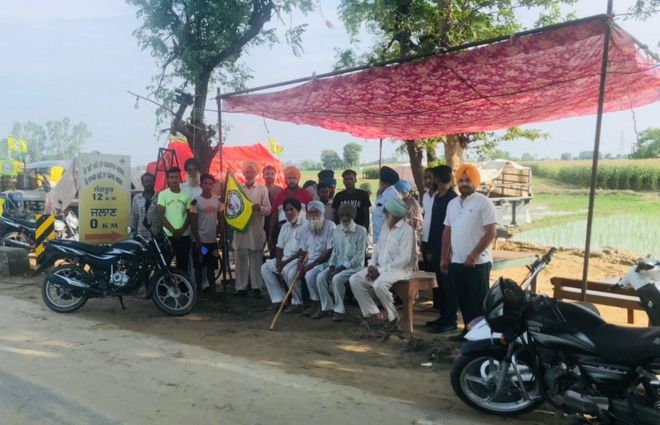 The difference in land acquisition rates in various villages for the Delhi-Katra expressway has angered area farmers, who have decided not to give the possession of their land to the National Highways Authority of India (NHAI).

Seeking uniform land acquisition rate, the farmers have started an indefinite protest near Kheri Chandwan village of the district.

ROW OVER AWARD TO ACQUIRE LAND

The matter’s in my knowledge. The SDM has passed the award to acquire land for the e-way on the directions of Div Commissioner, Patiala (Arbitrator). But the NHAI challenged the award in a civil court. —Jitendra Jorwal, DC

“When the land of all villages is same and is connected to each other, then why different acquisition rates? The authorities are giving different rates of Rs 92 lakh per acre, Rs 72 lakh per acre and Rs 66 lakh per acre. It’s unacceptable and we won’t allow the authorities to take possession till the per-acre rate is uniform,” said Pardeep Singh, a resident of Harkishanpura village and a member of the Road Sangharash Committee.

Meanwhile, farmers of various villages have formed a committee and they have been keeping a vigil to prevent the NHAI from taking possession of the land without their consent. “We are giving our fertile land to construct a road and have the right to get equal compensation. But some residents of Phaguwala have got higher rate than other villagers, despite the fact

that the land is of the same area,” said Ranjha Singh, another area farmer.

till the acceptance of the farmers’ demand. “It’s injustice with the area farmers. In the coming days, we have plans to further intensify our agitation as we won’t allow the NHAI authorities to take possession of the land,” he added.